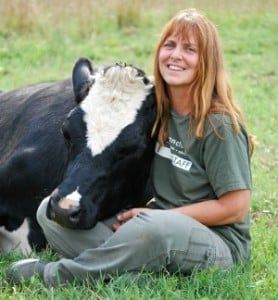 It’s no wonder that Farm Sanctuary National Shelter Director Susie Coston is known as “The Farm Animal Whisperer.” She has two decades’ worth of experience running animal sanctuaries, and in her spare time (ha!), she leads our annual Farm Animal Care Conference and mentors others who have started their own sanctuaries.

She shared her valuable insight into the lives and care of farm animals and what it’s like to work in the animal protection movement in a recent Reddit AMA (Ask Me Anything). Here are some of Susie’s most upvoted responses to Reddit member questions (lightly edited for length).

On encouraging others to live a more compassionate lifestyle:

[Be] patient with others and really [reach] out and meet them where they are. If you are a good cook, unlike myself, inviting people for a very delicious vegetarian/vegan meal and just being warm and positive is a good start. … Everyone has a gift — artists, chefs, writers, storytellers, etc. — and using that gift to spread the message is a great way to contribute and encourage others to be more compassionate. On getting along with meat-eaters, despite knowing the plight of farm animals:

I always feel it is somewhat challenging especially when they seem to talk about it more knowing I am vegan than I think they would have if I were not. I feel you have to meet people where they are, however, since I put my parents, for example, through a bit of hell most of my teenage life — so me showing intolerance to them for not believing what I believe would be a bit hypocritical. I also see that by not fighting with them about it — by still loving people and just being who you are — many eventually change — maybe not completely but in some ways. My parents are eating far less meat, for example! 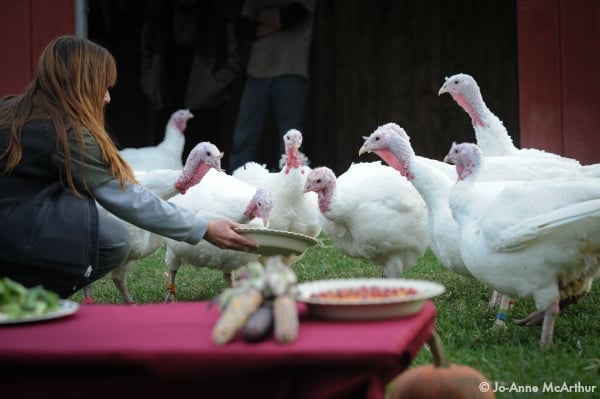 On people’s misconceptions about farm animals:

I think it is easy to see them differently because the only exposure most people have to farm animals is when they see them in an environment that is not natural — where they are frightened, where they are overcrowded, not receiving individualize care. We see them here being themselves — happy, sad, funny, etc. When they are not frightened they grieve more outwardly, they play, they are just more comfortable being themselves. … I think there is such a misconception about their sentience — especially birds, since they seem to be harder to relate to than mammals. We see birds — especially mothers arriving with babies, who sleep with a wing wrapped around their child to protect them. It is incredible. END_OF_DOCUMENT_TOKEN_TO_BE_REPLACED 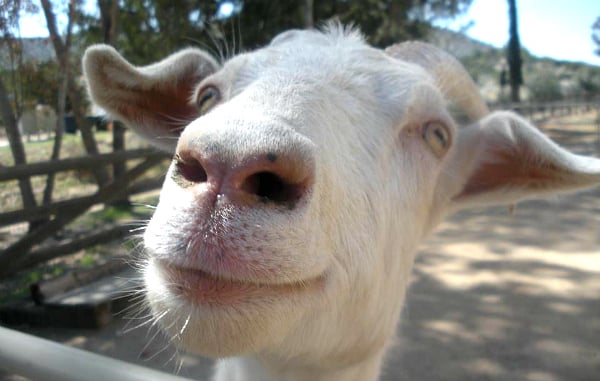 He was typically the first resident to greet you. No matter how hot the day or how harried the Los Angeles freeway traffic, you would be hard-pressed to enter the hacienda-style gates of our Southern California Shelter without stopping to admire, photograph, and approach the ever-charming and always regal Prince.

He thoroughly enjoyed the attention, of course. One of the most outgoing and friendliest goats of his herd, Prince relished human companionship. He loved Sunday tours and was especially patient with children, standing completely still while they threw their arms around him and gently touched his floppy ears and long horns. He even let children inspect his teeth! He was an exemplary ambassador for farm animals. Prince was not only adored by visitors but also deeply loved by shelter staff. Every day he would open the gate for caregivers at feeding time (sometimes letting his herd mates out!). He knew his name and would come running when a caregiver called him, especially if they had his favorite treats (strawberries, bananas and molasses). He loved the sun and spent most of his days on his big hillside, playing and soaking in the rays. His was a blissful existence.

But recent months were hard on our friend. Prince had caprine arthritic encephalitis (CAE), an incurable retrovirus that is transmitted to newborn goats through their mother’s milk. He was diagnosed in 2013. There is no cure for CAE, but we immediately started Prince on immune-supportive supplements, and eventually pain medications, to give him a fighting chance at a longer, more comfortable life. All of his medications and supplements were hidden in his favorite treats, and he would run up to us enthusiastically when it was treatment time.

Sadly, the CAE advanced much faster than we had expected, rapidly taking its toll on Prince’s knee joints over the last year. In the end, he lost the use of his left leg, and his pain became untreatable. Wishing to spare our friend any suffering, we made the heart-wrenching decision to say goodbye. 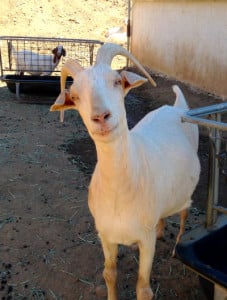 It was only four years ago that we said hello to Prince. Police officers who pulled over a car for speeding found the two-week-old Saanen stuffed in a bag inside. Prince was seized and brought to the San Gabriel Valley Humane Society. From there we welcomed him to the shelter.

Just as that tiny young goat was gently carried in his new caregivers’ arms when he arrived, so was he surrounded and held by his caregivers as our vet gently released him through euthanasia. Prince was unafraid and left us calmly. He will be missed every day, and our very short time with him will be cherished always.

We have so many stories of caring for and befriending this sweetheart. And we know so many of you do, too. Please share your thoughts and memories of Prince in the comments below.

After all, Prince was someone, not something.

On the night of June 8, a semi-trailer truck crashed through a guardrail and tumbled down a ravine near Xenia, Ohio. On board the trailer were 2,200 piglets.

Between 300 and 400 of the piglets were killed on impact or so badly injured that they later had to be humanely euthanized by responders. Approximately 1,500 of the survivors were quickly captured and brought to a nearby fairground to be held until a second truck arrived the next morning to bring them to their original destination. That left an unknown number of piglets loose somewhere in the surrounding woods.

Farm Sanctuary was alerted to the accident the night it happened. National Farm Animal Placement Coordinator Alicia Pell immediately began contacting local authorities for information and to offer Farm Sanctuary’s help. She eventually learned that no one had kept an accurate count of the fatalities or of the live piglets who had been picked up by the trucking company. This meant no one knew how many piglets had disappeared into the woods. One estimate by local authorities put the number at 200. 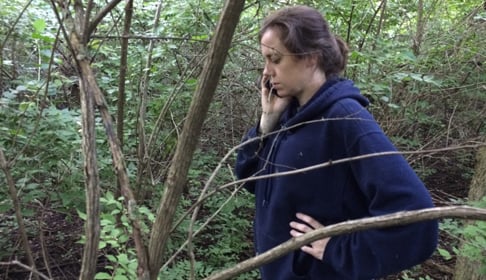 The Ohio Department of Natural Resources (OHDNR) took charge of the search. The trucking company had relinquished custody of any remaining piglets after it picked up those at the fairground, counting the missing ones as an economic loss. The OHDNR informed us that any survivors would be free to go to sanctuary. With that assurance, we mobilized a rescue team.

The team arrived in Ohio the second morning after the crash. Five staff members had driven from our New York Shelter with a trailer, traveling all night to arrive as soon as possible; meanwhile, Alicia and a staff member from the Southern California shelter had flown in from the L.A. area. The team spent the next two days searching in coordination with the OHDNR and a number of volunteers who showed up to help. 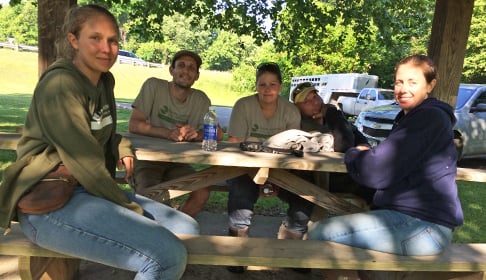 After two days of searching, the rescue team had found no piglets. The search area was vast, and the forest was dense with undergrowth. Searchers could have walked within a few feet of a piglet and not seen him or her. Nonetheless, we concluded that the guess of 200 loose piglets was likely incorrect; the OHDNR estimates that there might be a dozen at most. We also concluded that the only effective way to find any survivors would be through a comprehensive search similar to the kind mobilized for human children missing in the woods, with dozens or more people combing the search area simultaneously. The authorities would not or could not launch such a search with their own manpower and would not allow such large numbers of volunteers into the area. END_OF_DOCUMENT_TOKEN_TO_BE_REPLACED