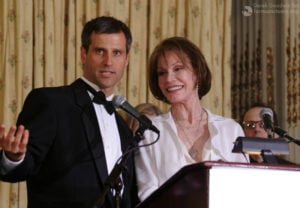 Gene Baur and Mary Tyler Moore at Farm Sanctuary’s 2004 Gala, for which she served as chairperson.

Last week, we lost a cultural icon, and I’ve seen numerous, well deserved, tributes and reflections about her life, but few highlight what Mary Tyler Moore, herself, said she wanted to be remembered for, “as somebody who made a difference in the lives of animals.”

I am deeply grateful to have worked closely with Mary, whose influence spanned generations. In the 1960s, she pushed to wear pants on the Dick Van Dyke show, and in the 1970s she played a single career woman on the Mary Tyler Moore Show and helped spur a nascent discussion of gender issues and inequities. Mary pushed the envelope with grace and guts, and served as a role model for women like Oprah Winfrey, who continue to give hope and inspire others today. 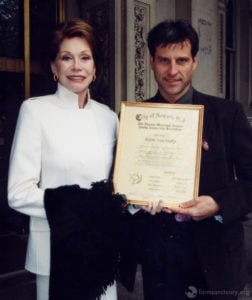 I was very excited, even giddy, when Mary Tyler Moore attended Farm Sanctuary’s gala at the Plaza Hotel in New York City in 2001. She was a living legend who cared deeply about truth, justice, and compassion, and she showed up consistently to help out. Her commitment to protecting animals from cruelty was profound, as she said: “I help wherever I can. Whether that means going to Washington to lobby Congress or just showing up for a benefit and signing autographs, whatever needs to be done I do happily.”

Mary chaired Farm Sanctuary’s Sentient Beings campaign, which asserted that animals exploited by agribusiness are sentient beings, capable of awareness, feeling, and suffering, and that human beings have an ethical obligation to treat them with compassion. With Mary’s leadership, dozens of cities enacted proclamations, formally recognizing farm animals as sentient beings who deserve our respect.

Concerned that farm animals were excluded from basic humane protections, Mary urged elected officials to enact laws to prevent egregious suffering, and her presence turned heads. I recall lobbying with her at the Capitol in Trenton, NJ, and when people saw her, their faces lit up as they broke out into the Mary Tyler Moore theme song, “Love Is All Around”. Throughout her life, as the song intoned, Mary could “turn the world on with her smile.” Her efforts in Trenton inspired lawmakers to advance bills to outlaw the inhumane treatment of calves raised for veal, which passed the state Senate, but unfortunately, bogged down in the NJ Assembly. 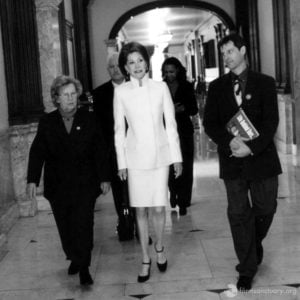 Mary was a committed and tireless advocate and worked on Farm Sanctuary nationwide campaign to prevent the suffering of downed animals (animals too sick or injured to stand). In 2002, we successfully negotiated a provision to protect downed animals in the House and Senate versions of the Farm Bill, but at the last minute, it was removed in a closed door conference committee by anonymous agribusiness allies. After a fruitless call with an agriculture committee staffer, Mary and I commiserated over the utter lack of transparency and accountability. We were frustrated, but we didn’t give up, and eventually, we’d win a federal ban on the slaughter of downed cows.

Besides working on legislative issues, Mary believed it was important to educate citizens. A highlight of my life was collaborating with Mary on a short documentary film called “Life Behind Bars.” I wrote the script, which she edited and improved, and we filmed it at her home near Central Park in Manhattan. Mary narrated the film, speaking to camera and reading from a teleprompter, and I was the director.  It was surreal to direct Mary Tyler Moore, who I grew up watching on TV. I began each scene saying “action.” She was a super star, and I had never directed, but Mary was warm, professional and collaborative, and she brought out the best in everybody. 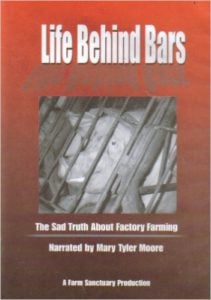 As we began filming, Mary read about the suffering animals endure on factory farms. She was outraged by the cruelty, and her voice showed it. She stopped and looked at me, and asked, “Should I be angry?” We understood each other and shared the same perspective. How can you not feel angry when innocent creatures are so terribly abused? But, we both knew that sounding angry could shut people down and push them away. It was important for her to be authentic, but also accessible. “How about expressing sadness, instead of anger?” I suggested.

Mary moderated the narration, explaining the cruelty of factory farms and contrasting it with how animals live at Farm Sanctuary. The video exposed inhumane confinement systems including veal crates, gestation crates and battery cages, and called for these to be banned in the U.S. The film release coincided with an initiative campaign in Florida, which resulted in the first U.S. law to ban a factory farming practice (i.e. gestation crates). “Life Behind Bars” was also distributed to members of Congress and state legislators. Today, nearly a dozen states have outlawed one or more of these cruel systems, and consumer pressure in the marketplace is bringing about additional reforms. 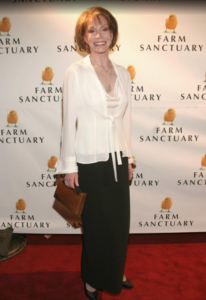 After filming, Mary treated us all to a vegan lunch at her apartment, which included vegan “shrimp” that she had first tried when it was served at a Farm Sanctuary gala. As we ate and unwound, we were joined by Mary’s rescued dogs, and I was reminded of her multi-faceted efforts. She cared about all animals, wild and domestic, and she always spoke on their behalf.

Mary’s humanity and generosity were inspiring, and it is fitting to see such an outpouring of love in response to her passing. She brought beauty and joy to a world filled with hurt and despair, and she did it with such brilliance and grace. She is now of the universe, but her earthly presence continues in those who she touched and who aspire to make our world a kinder place. 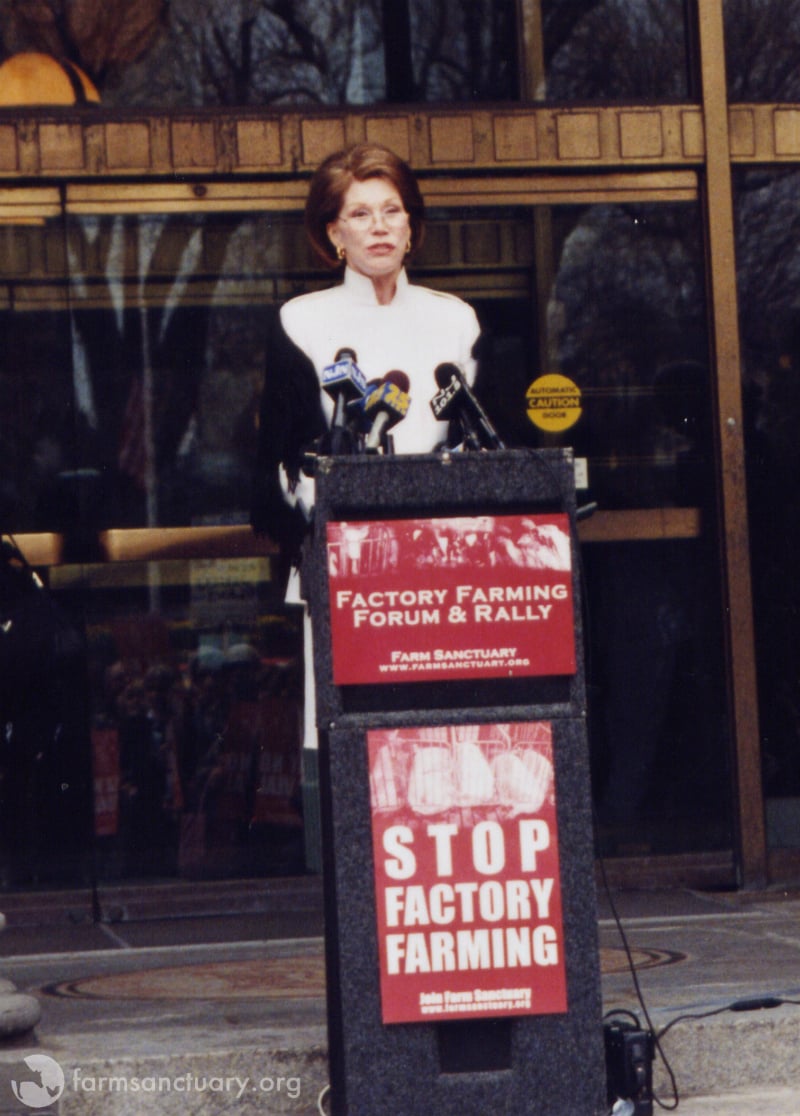 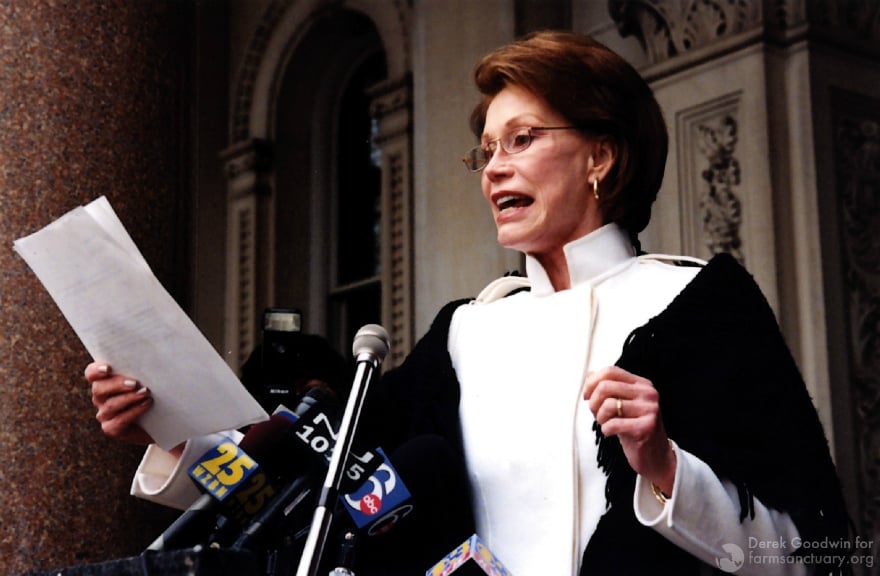 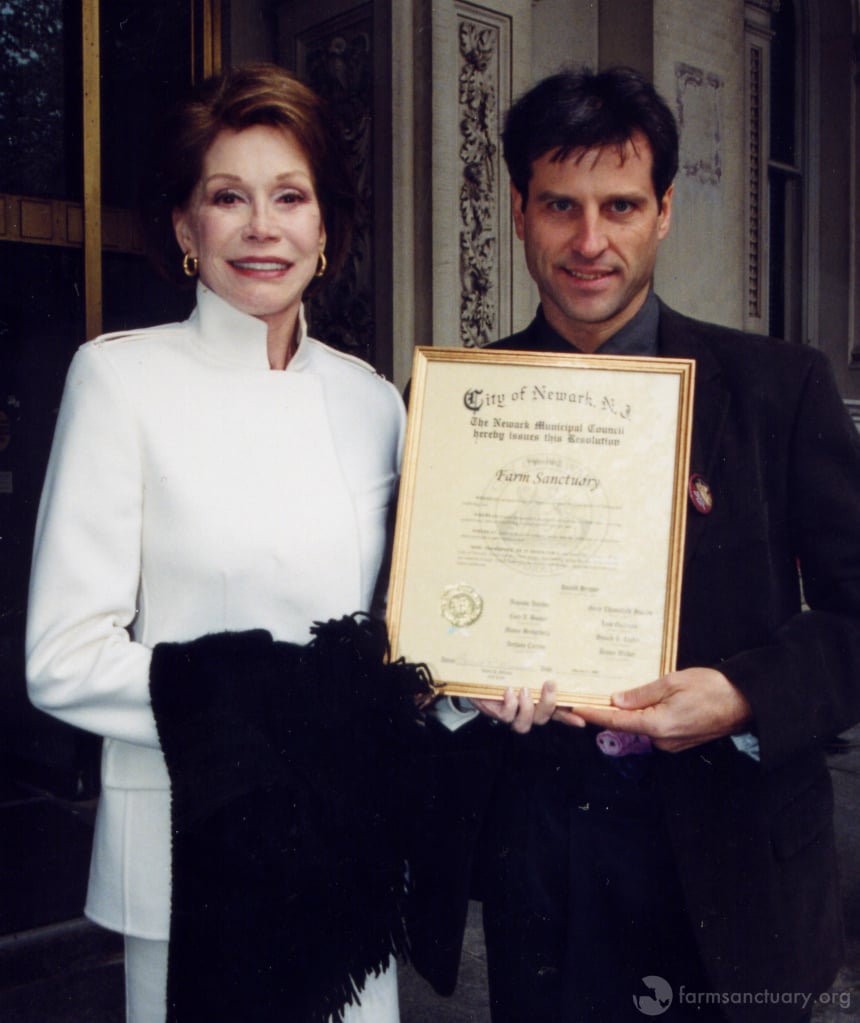 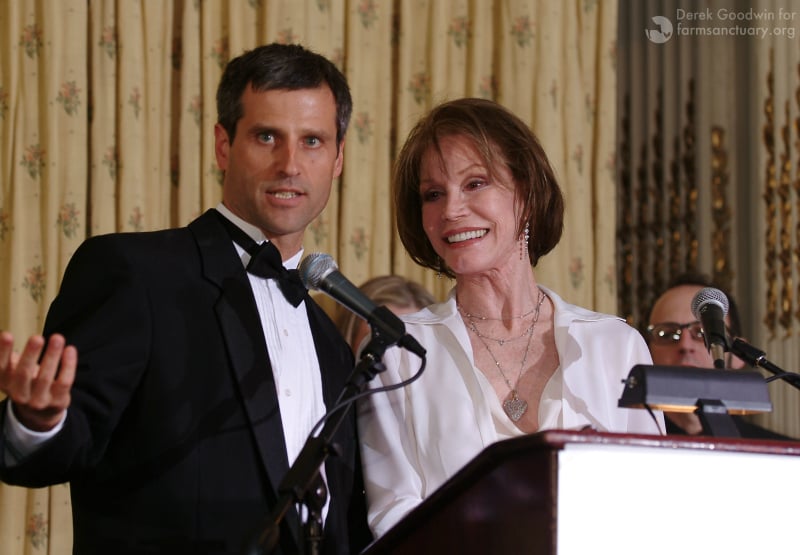 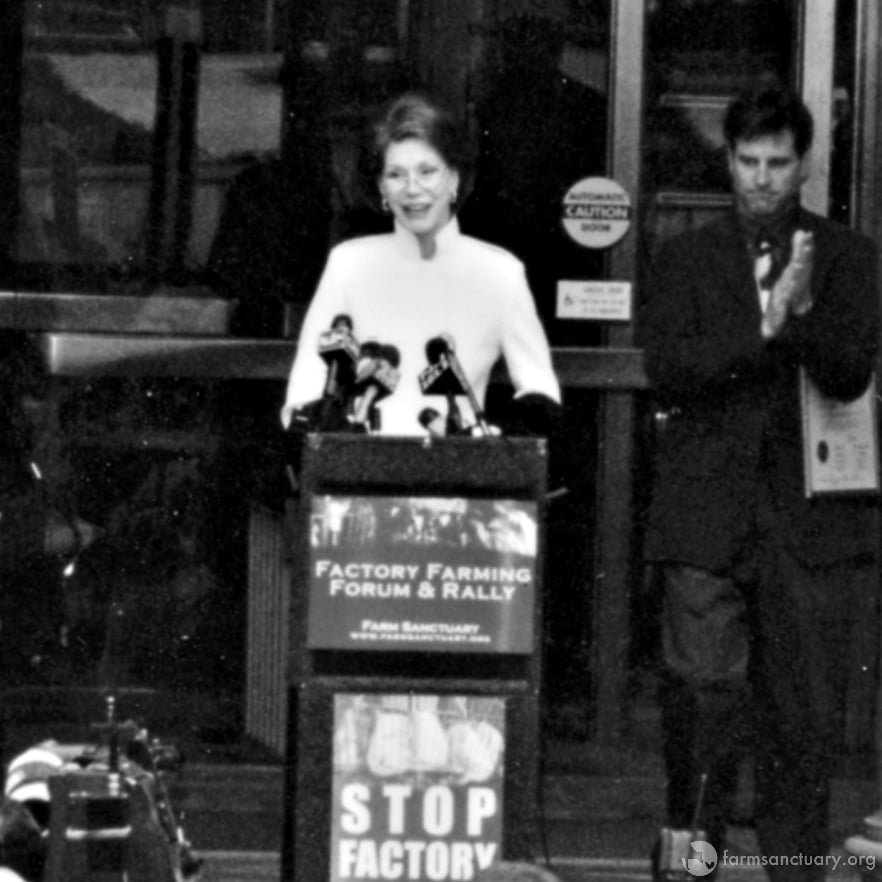