Ivan has been a part of my life for as long as I’ve worked at Farm Sanctuary. When I arrived at the New York Shelter 14 years ago, Ivan was here to welcome me; he had been rescued during a cruelty case years before. And in the years since, I had the pleasure of seeing this incredible goat nearly every day. 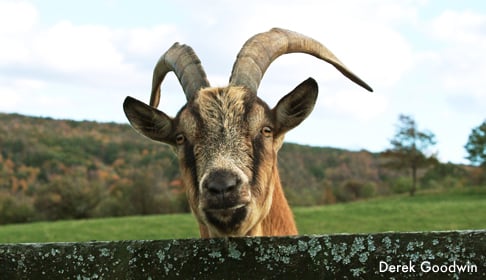 When I think of Ivan, I think of the beautiful friendships he forged during his time with us. For many years, he had two best friends: TJ, an older goat who was the head honcho and reigning curmudgeon of the goat herd, and a goat named DiMaggio who was around Ivan’s age. The three of them spent their days rambling through our lush pastures, enjoying every moment of shelter life. Sadly, TJ passed away in 2009, leaving Ivan to assume the role of herd leader.

Ivan and DiMaggio became inseparable after TJ’s death, and they loved each other fiercely. From play-fighting out in the pasture to sleeping contentedly side by side in the barn, these two boys did everything together. Their friendship was an important part of Ivan’s life, and he was distraught when DiMaggio died of cancer.

Farm animals form strong bonds and mourn when they lose their herd mates, but thankfully Ivan was able to open his heart again. He developed another close relationship with an elderly goat named Shante who also had lost two close friends. Once Shante began spending time with kind and loving Ivan, each found a new best friend and a renewed sense of comfort. They spent the last two years of Ivan’s life making each other very happy. 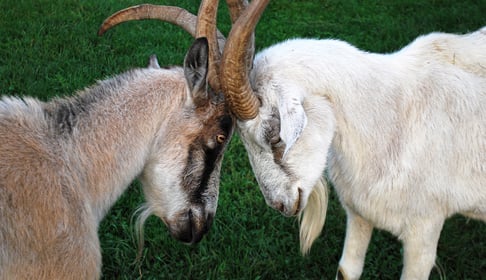 Although Ivan was healthy and active as he aged, last winter was difficult for him. Some health issues arose that are common among elderly goats, as did some symptoms that stumped his doctors. But, with care and treatment, Ivan rallied and managed to have yet another wonderful year.

This winter was different, however. Regardless of the many precautions we take and the extra comforts we provide, winter is a hard time for our elderly animals — and Ivan was no exception. Everything seemed fine until one day Ivan was suddenly too weak to stand. His legs were swollen, and he was clearly dehydrated. We quickly drove him to meet our vet in a parking lot, where he put a catheter in place and drew blood, which was rushed to the diagnostic lab. Unfortunately, the results revealed that Ivan was a very sick goat suffering from the final stages of renal failure.

Even with fluid therapy and around-the-clock care, Ivan’s condition rapidly worsened to the point that he was unable to hold his head up. At 17 years old, Ivan was clearly ready to say goodbye, and any extreme attempts to treat him would have been more for our benefit than for his. Euthanasia was the only compassionate option to spare him further suffering, and we were all devastated to lose our cherished friend.

We have all felt this loss deeply. It’s hard for me to convey just what a powerful presence Ivan was at the shelter. He was an impressive giant of a goat with long, graceful horns, but he was gentle and kind to every member of the herd. Goats establish a herd hierarchy largely through physically challenging one another, and dominance is determined primarily by strength. Yet, even when Ivan was older and clearly weaker, no goat in the herd ever challenged him. His benevolent leadership was accepted unanimously. 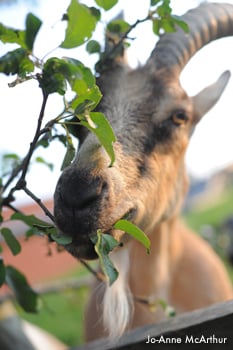 Despite the cruelty he faced early in life, Ivan was gracious to humans and patient with everyone he met. He was even patient while asking for attention and known for silently inching to your side, politely waiting for you to give him some love. His sponsors adored him, and those who were able to visit him always brought him treats. And although he saw these sponsors only a few times a year, Ivan clearly remembered them as well as so many other human friends he has made over the years.

Ivan loved to roam and graze in our goat pasture and lounge casually on our goat jungle gym. But no matter how far away he was, Ivan would always come if you called his name. Knowing that we’ll never see Ivan and his beautiful family running to greet us when we call out to him is the hardest part. Now, our magnificent, regal Ivan has gone on to roam further pastures, comforted by his old pals.

I will miss Ivan dearly, as will everyone else who had the pleasure of meeting this special goat. 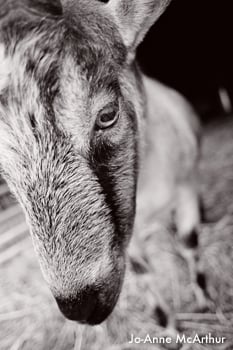