Battery cages are the small wire cages where about 95 percent of laying hens spend their entire lives; each hen is given about 67 to 76 square inches of space (a standard sheet of paper measures 94 square inches). To get a sense of a hen’s life in a battery cage, imagine spending your entire life in a wire cage the size of your bathtub with four other people. You wouldn’t be able to move, so your muscles and bones would deteriorate. Your feet would become lacerated. You would go insane. That’s precisely what happens to laying hens. 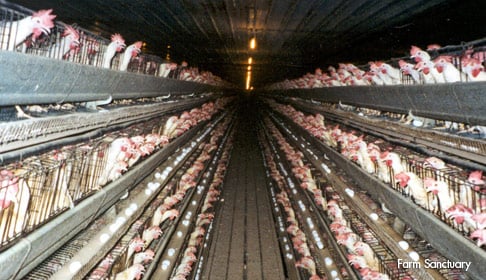 In the United States, roughly nine billion chickens, pigs, and other farm animals are consumed annually, and the vast majority of them are abused in ways that would warrant felony cruelty-to-animals charges were dogs or cats the victims. But three systems are particularly cruel: gestation crates for pregnant pigs, veal crates for calves, and battery cages for laying hens. As of January 1, all three are illegal across Europe, and it is past time for the United States and Canada to follow suit.

After decades of consumer outcry, the veal industry recently took the important step of announcing that it will work toward eliminating the crate confinement of calves. And, as discussed previously, gestation crates may also be headed for the dust bin of history. While this is positive news for pigs and calves, there is currently no clear end in sight for battery cages, with roughly 95 percent of all eggs in the United States still coming from caged hens. There are roughly 4.5 million mother pigs and fewer than 500,000 calves in crates, and approximately 250 million hens in battery cages. So for every caged calf or pig, there are roughly 50 caged hens.

Barren battery cages are so hideously cruel that, in addition to having been outlawed across the European Union, they have been condemned by the Pew Commission on Industrial Farm Animal Production, which included former Kansas governor John Carlin and former Secretary of Agriculture Dan Glickman (who also chaired the House Agriculture committee), as well as farmers and ranchers. They’re also condemned by every animal protection group in the world.

Battery Cages Destroy Chickens’ Bodies
Battery cages are so small that not one hen can extend her wings, yet there are three or more hens in each cage. The animals’ muscles and bones waste away from lack of use. By the time hens are removed from cages after about two years, they’ve suffered from severe bone loss and tens of millions suffer new broken bones as they’re ripped from their cages. 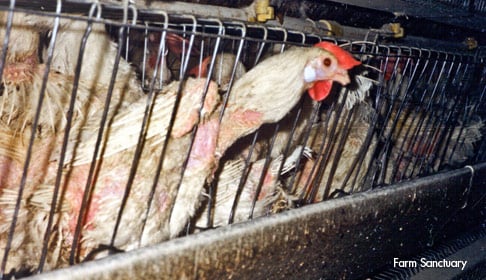 Some birds’ skeletal systems become so weak that their spinal cords deteriorate and they become paralyzed; the animals then die from dehydration in their cages. This unimaginably horrid situation is so common that the industry has a term for it, “cage fatigue,” and investigation after investigation finds living birds forced to stand on the rotting, mummified carcasses of their dead cage-mates. Additionally, standing and rubbing against wire cages destroys the health of hens’ feathers and skin, and the birds’ overgrown claws often become caught in cage wires; they either die where they are trapped, or they have to tear their skin to escape. Click here or here for documentation and video; it is hard to imagine a life worse than that of a battery caged hen.

Battery Cages Destroy Chickens’ Minds
Chickens outperform both dogs and cats on tests of cognitive, emotional, and behavioral complexity. Dr. Jane Goodall explains that “farm animals feel pleasure and sadness, excitement and resentment, depression, fear, and pain. They are far more aware and intelligent than we ever imagined… they are individuals in their own right.” Discovery Magazine explains research on chickens from the University of Bristol: “Chickens do not just live in the present but can anticipate the future and demonstrate self-control… something previously attributed only to humans and other primates…” 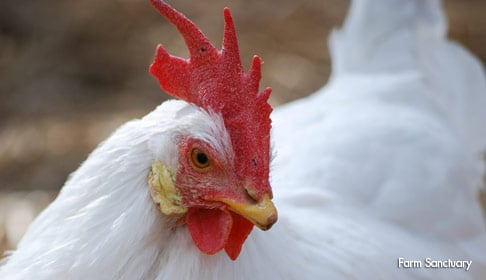 In battery cages, these inquisitive and social animals — who are particularly doting mothers — have their every natural desire frustrated. They never perch, forage, take a dust bath, nest, or explore their surroundings. Their lives are categorized by unmitigated mental suffering — from the moment they’re crammed into a cage until the moment they are torn from it two years later, as is well-documented in this Humane Society of the United States report.

This is what housing looks like for 95 percent of American hens. Each egg requires 34 hours in these conditions.

Conclusion
So far, the only national grocery store chain to have banned the sale of eggs from caged hens is Whole Foods. The only restaurant chain promising to ban them from its supply chain is Burger King (by 2017). These companies deserve plaudits for their progress. These types of cages will also be illegal in California in 2015 and in Michigan in 2019, and legislation to ban them will be introduced in Massachusetts soon (if you live in Massachusetts, check farmsanctuary.org for updates).

At Farm Sanctuary, we spend our lives with farm animals, and we wouldn’t eat them or their eggs under any circumstances. We recoil at the abuse of hens in all systems, including cage-free and colony cage conditions. But we also work to abolish the very worst abuses of farm animals, and it’s hard to imagine anything worse than the tiny, barren, cramped battery cages where 250 million hens are currently forced to spend their lives.

Battery cages have to go. Please visit farmsanctuary.org to find out how you can help, and watch this video of Allison Janney as she introduces Symphony, a hen who escaped from a battery cage.

This blog originally appeared on Huffington Post on January 16, 2013