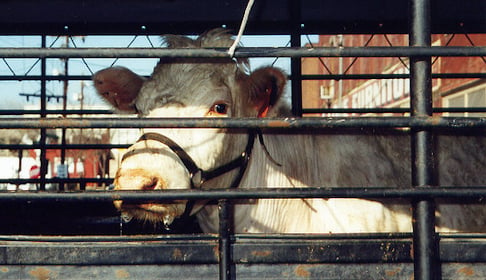 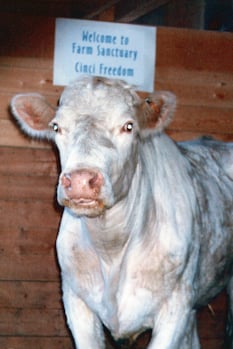 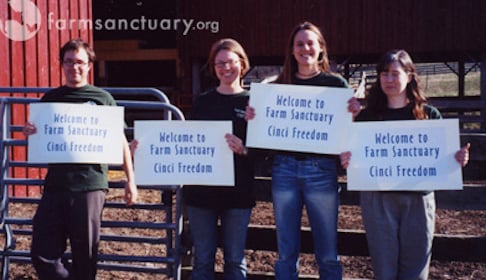 Cinci’s effect on members of the cattle herd was equally profound. Forming a natural bond with other famous slaughterhouse escapees who came to the shelter before and after her (including Queenie, Annie Dodge, and Maxine), Cinci traveled with her strong, faithful female companions as an inseparable unit — the members of which moved gracefully and intuitively together as if all were of one body and one mind. But her spirit breathed life into the entire cattle herd, as well. While Cinci preferred that we humans keep a respectful distance, she connected with every cow and steer, treating each of them with the utmost tenderness and love. 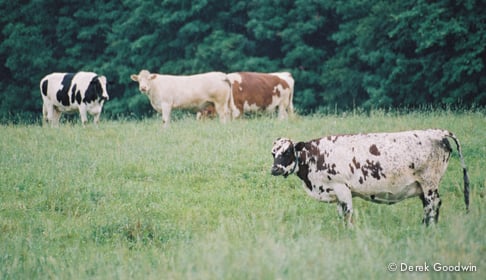 Cinci with Molly and Cocoa.

The adoration and devotion the herd felt for Cinci in return was never more apparent than when she, after six years of living among dear friends at the sanctuary, suddenly lost use of her back legs and became immobile. As we anxiously awaited results of veterinary diagnostics, Cinci’s friends, Maxine and Robin, stayed by her side – and remained there constantly through that first difficult night. The next morning, we received the tragic news that Cinci had spinal cancer, a terminal illness that often progresses quickly in cattle and only becomes apparent when the size of the tumor increases and causes sudden pressure on the animal’s spine. With heavy hearts, we also learned that this cancer could not be kept at bay.

When it came time to say goodbye to Cinci, the herd gathered close around her. One of the eldest steers, Kevin, stepped forward to lick her face, while Iris, an older female, licked her back, soothing and keeping her calm up until she took her final breath. After our beautiful girl passed, every member of the herd approached to say goodbye, each one sharing with Cinci one last moment of affection. Though heartbreaking, the herd’s mourning ritual was also beautiful and comforting, as there was no doubt that Cinci not only lived, but also died knowing that she was cherished by all. The brilliant light that radiated from Cinci burned out too soon, leaving a void that won’t be easily filled. Though it is difficult to reconcile the loss of one who lived so passionately, we are heartened by the lessons she taught all of us while she was alive. Most of all, we are grateful for the life Cinci led when courage and compassion set her free, allowing her not only to live, but to love with all her heart and be loved so fully in return.