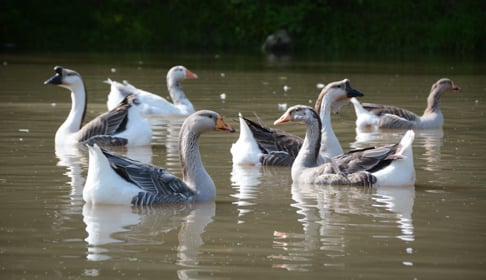 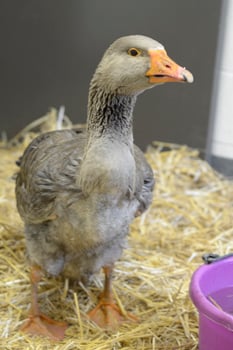 Geese are sensitive animals who form deep bonds with their mates and friends. Having witnessed the deaths of his companions, this poor guy was so distressed that he became neurotic and pulled out all his chest feathers. The feathers are now starting to grow back, but Ace is still frightened and has a great deal of emotional healing ahead of him. Finding him a friend to help him feel safe again has been a priority, but all of our residents are clearly paired up and bonded with other geese.

As luck would have it, however, we just welcomed another old goose to the shelter. Ventura had been living at the Humane Society of Greater Rochester’s Lollypop Farm since her caregiver passed away seven years ago. Though other geese also lived at the shelter, none would have anything to do with Ventura. Knowing how important companionship is for geese, Lollypop staff began seeking a new home where this lonely goose might be able to make friends. We offered to take her in, hoping that she and Ace could give each other the camaraderie that both needed so much. We introduced them, and they were soon smitten with each other. 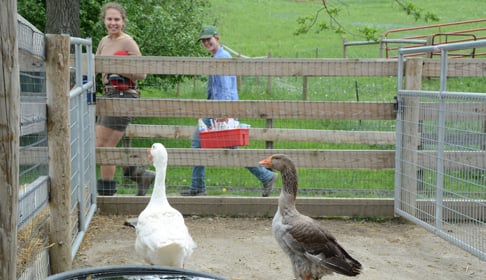 Cricket
Cricket came to us through the intervention of Farm Sanctuary member Jillian Booth. While at a farmer’s market, Jillian came across a vendor selling chicks. One chick was having trouble walking due to deformed legs, a condition not unusual for these delicate young animals. While still in their eggs, commercially raised chicks are typically kept in incubators instead of in the care of their mothers. Any slight malfunction or error in the incubation process, or often congenital conditions, can cause deformities. 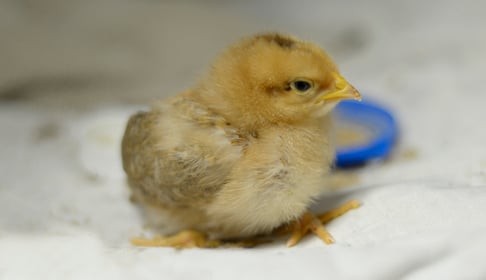 When Jillian inquired about the struggling chick, she was told that the baby was a “dud.” The vendor acknowledged that the chick would die and professed not to care. This indifference to, and even expectation of, the death of weak or special-needs animals can be found across the spectrum of animal agriculture, from large industrial facilities to seemingly homey small operations like this farmer’s market booth.

Jillian, however, would not accept the death of this little chicken whose life had just begun. She expressed her concern and, since the chick would not have sold, the vendor simply gave the baby to her. Jillian then got in touch with Farm Sanctuary, and we welcomed Cricket to the shelter, where we are now working on correcting Cricket’s leg problems.

Like most babies, chicks need companionship and become upset when they’re left alone. Because Cricket has no mother or siblings here, caregiver Abbie Rogers has been taking this youngster home with her at night and spending time with Cricket out in her garden, where the chick is now learning to walk and explore on slowly improving legs.

Bronwyn
Bronwyn was found running loose on the streets of Brooklyn. A “broiler” type chicken, the young “peep” had likely escaped from one of the area live markets, storefront slaughterhouses where animals are killed and sold onsite. Bronwyn was caught by a teenager, and a family friend kept the peep at her apartment awaiting avian influenza test results before transport to sanctuary. 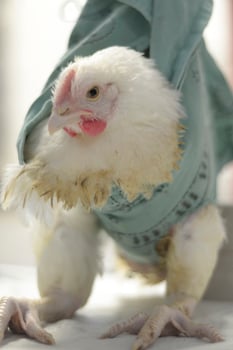 Bronwyn arrived unable to stand due to septic joints. Since broiler chickens, who grow so quickly, can have trouble recovering from leg problems, we knew we needed to act fast. We started Bronwyn on antibiotics and pain medication and began using a sling to keep this youngster from spending too much time on the ground. To our relief, Bronwyn did recover and is doing much better now, running around with a pure zest for life.

Baby Turkeys
Over the years, many a group of baby turkeys has been left on our doorstep, saved from the factory farming industry by some anonymous rescuer. It happened again this spring, and when our live-in caregivers saw a light come on at our Rescue Barn, they discovered a box of eleven baby turkeys there. 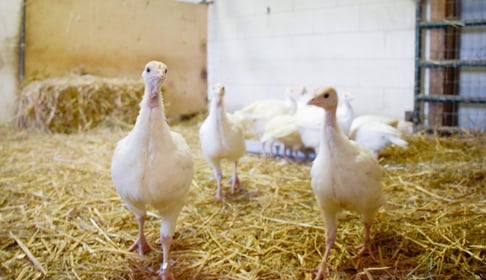 The baby turkeys safe and sound.

Like the others we’ve welcomed, these babies had suffered de-beaking, an industry procedure in which the sensitive upper beak tip is amputated in order to curb fighting among stressed birds in overcrowded industrial facilities. Also like others rescued from the often filthy conditions of turkey factories, these three- to six-week-old newcomers were dirty, and some were sneezing. Already, however, they are feeling better — and ready to overrun the shelter!

Transport Accident Survivors
Our biggest wave of newcomers this season consisted of 60 chickens rescued by New York City Animal Care and Control (AC&C). Fifty-nine of these birds, colored “broiler” chickens likely raised at a farm in Pennsylvania or upstate New York, were headed to a city live market when the crates in which they were packed fell off the back of a transport truck. Such accidents are common since farm animals are transported with less care than is typically afforded to boxes of cereal. Last year, we rescued 87 chickens from a similar incident. Just as we arrived at the AC&C facility to pick up these accident survivors, someone dropped off a male industrial broiler chicken who likely escaped from a city live market. 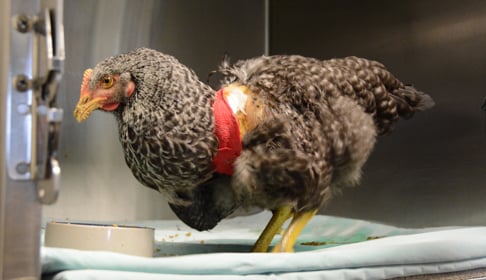 Busy Days
With all these arrivals, our staff has been working hard to treat and rehabilitate newcomers while also continuing to provide individualized care to our incumbent residents and keep all shelter operations running smoothly. The work of rescue and sheltering is unpredictable, characterized by sudden, unexpected surges of activity. It demands a great deal from our staff, but no matter what, they rise to the challenge. 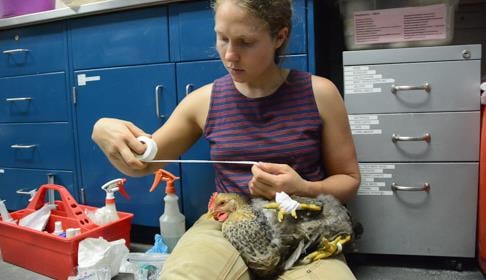 To complicate matters this spring, all the incoming birds who had not been tested for avian influenza (AI) prior to arrival had to be kept under strict quarantine. As we’ve reported, an epidemic of high-pathogenic avian influenza has swept through portions of the western and midwestern U.S. in recent months. Though no outbreaks have yet occurred in the eastern U.S., we’re taking every precaution to keep the birds here safe from this devastating disease. That means comprehensive isolation of untested new birds, with staff donning special iso gear and using foot baths whenever passing between these populations and the rest of the shelter. Though they make providing care more arduous, these measures are worth it to guard the safety of our residents. Thankfully, the majority of incoming individuals and groups have now tested negative for AI. We are still awaiting results from the group of 60 from New York City.

The transport accident that brought us those 60 chickens occurred on the Thursday before Memorial Day, and we spent the holiday weekend checking each chicken from head to toe; administering antibiotics and pain medications; cleaning, debriding, treating, and wrapping wounds; and stabilizing fractures. Some birds required trips to Cornell University Hospital for Animals, including three who received surgery: Rosalie Lightening, who needed her fractured femur repaired, and Memphis Belle and Sassy McCoy, who each had a wing so badly damaged it had to be amputated. All three surgery patients are recovering nicely in our Melrose Small Animal Hospital and quickly warming up to their human caregivers. Several other chickens have smashed and broken toes, some of which may need to be amputated as well. For flock members with wounds, fractures, and other ailments, daily checks and treatments are ongoing. 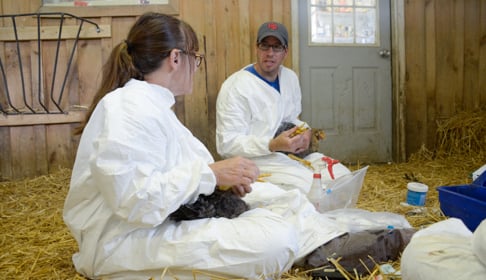 Despite their injuries and the fear that lingers from their harsh early lives, these chickens are beginning to settle in. They are happy birds and take such comfort in each other’s companionship. After so much stress and uncertainty, they are finally safe to enjoy friendship, rest, and the outdoors — probably for the very first time in their lives. In place of the slaughter that awaited them, they are now on the cusp of a spectacular summer.

Common Plight
Most of the birds we rescued this spring faced misery and the threat of death. Whether these hardships beset them at a private residence, at a farmer’s market, on a factory farm, or during transport, these birds were imperiled by a pervasive view of farm animals as objects for use rather than individuals worthy of protection.

The prevalence of this misconception is a necessary condition for the existence of the animal-agriculture industry. As the diverse backgrounds of our rescued animals illustrate, however, the consequences of this attitude play out not only in the crowded production facility or on the slaughterhouse kill floor but also throughout our society — downtown, down the street, next door. As long as animals are exploited for the food we eat, the suffering they endure will always hit close to home .

18 thoughts on “The Bird is the Word”