We often refer to animal protection work as a “movement,” and I believe that idea of movement is fitting as we reflect on the past year and look forward to the next. Movement suggests that we are defined by our actions, by what we are doing — like protecting farm animals from harm and promoting compassionate vegan living. We made tremendous strides toward creating a more just and compassionate world for farm animals in 2013 thanks to our committed and compassionate supporters, advocates, and friends — and I believe the momentum will just keep building. 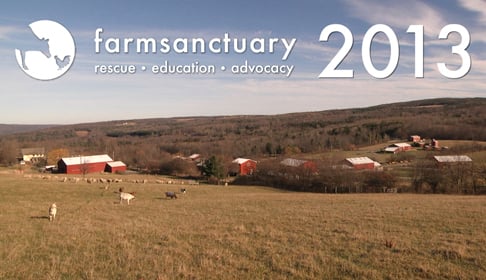 Making Headlines
Nearly every week over the past year, articles about animal welfare or plant-based diets could be found in major, national publications, including The New York Times, The Huffington Post, TIME magazine, and many more. Just this month, Rolling Stone ran a damning exposé entitled, “Animal Cruelty is the Price We Pay for Cheap Beef.” Last month, our Celebration for the Turkeys event was featured on Good Morning America, showing a compassionate holiday tradition to a national audience. Bruce Friedrich, Farm Sanctuary’s Senior Director for Advocacy, made headlines on several fronts, including a lively discussion about the ethical and environmental implications of lab-grown meat and the impact on factory farm animals on MSNBC’s program “All in with Chris Hayes.”

This media coverage represents an increasing interest in farm animal issues and growing concerns about where our food comes from. More and more people are questioning whether we should be eating animals. I recently participated in an Intelligence Squared U.S. debate, arguing for the motion, “Don’t Eat Anything With a Face.” I am happy to say that my partner, Neal Barnard, M.D., and I were declared winners of the debate. 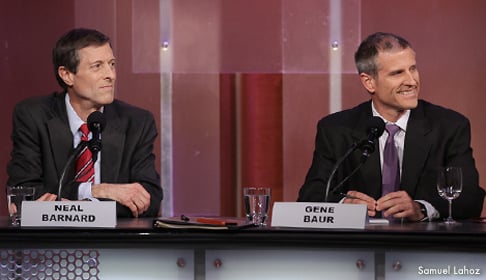 Bringing attention to the benefits of a plant-based diet this year was a slew of prominent figures in entertainment and politics, among them newly minted vegan Al Gore and power couple Beyoncé and Jay-Z, who have publicized their goal to try a vegan lifestyle for 22 days. Casey Affleck and Ryan Gosling lent their voices to our cause by speaking out against the use of intense confinement systems for farm animals and reaching millions with a message of compassion.

Farm Sanctuary’s work made headlines in 2013, too. We were named “Nonprofit of the Year” by VegNews editors and voted “Favorite Farmed Animal Sanctuary” by VegNews readers for the sixth consecutive year and “Favorite Nonprofit Animal Organization” for the first time.

Art Imitates Life
Books, poetry, painting, and films increasingly are challenging cruelty and inspiring change. The 2013 documentary Blackfish exposed abuse at Sea World, provoking a public outcry and prompting several musical acts to cancel shows there. The film has raised awareness about the tragedy associated with holding animals in captivity and denying them their basic needs. Filmmaker Liz Marshall released The Ghosts in Our Machine, a documentary examining the complicated relationships humans have with other animals and the ethical challenges we face when we exploit them. The film features Jo-Anne McArthur, photojournalist and longtime friend of Farm Sanctuary whose book on the same subject, We Animals, came out this month, as well as Farm Sanctuary National Shelter Director Susie Coston and some of the rescued animals at our New York Shelter. 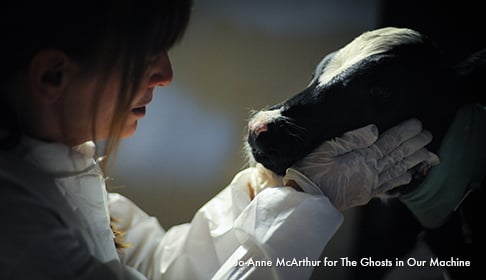 In the popular genre of animated movies, we celebrated the release of Free Birds, a major motion picture about getting turkeys off the Thanksgiving menu.

Serious Business
Ambitious entrepreneurs and innovative technological developments brought positive movement to the food industry in 2013. Companies like Beyond Meat and Hampton Creek Foods have been among the ventures creating game-changing alternatives to meat and eggs. These companies are flourishing and enjoying recognition in business communities and mainstream media — including Forbes, Fortune, Bloomberg, NPR, and The Huffington Post — for making plant-based meat and egg substitutes widely appealing and accessible.

Changing Hearts and Minds
Traveling around the country this year, I participated in many galvanizing festivals, conferences, and celebrations filled with energy and enthusiasm. People who care about animals are coming together to inspire and empower one another.

The interest and enthusiasm I witnessed at these events reaches far beyond those who identify themselves as vegans or activists. Opposition to factory farming and changing attitudes about eating animals are quickly becoming mainstream. Schools across the United States are offering more vegan foods, including the Los Angeles Unified School District, which recently instituted “Meatless Mondays” in its cafeterias.

Scientific studies on animal sentience continued to make advances in 2013. This body of research typically has studied species such as apes, elephants, and dolphins and is now expanding to include farm animals, who have not been as well understood. Farm Sanctuary is participating in this important work. We launched our Someone, Not Something project to share unique insights about farm animal emotions and intelligence with the public. The more we help others learn about animals who are exploited for food, the harder it will be for society to condone that exploitation. 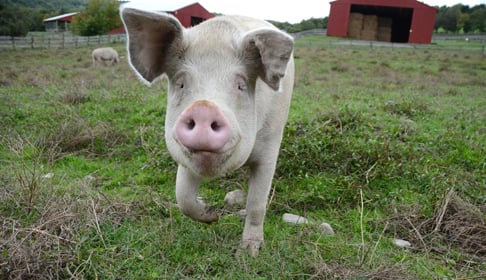 Pushing Forward
In 2013, we were part of a coalition that successfully defended bans in California prohibiting the sale of foie gras and the use of cruel confinement systems against agribusiness challenges. Our success at passing laws to protect farm animals in recent years has prompted defensive maneuvering by agribusiness. Seeking to keep cruelty out of the public eye, industry forces campaigned for “ag-gag” laws to criminalize the documentation of cruelty at factory farms. This year, “ag-gag” bills were introduced in 11 states across the nation. Happily, all 11 were defeated.

With increasing awareness about the abuses animals experience in the food industry and with growing availability of plant-based options, there is much reason for hope. Our movement is growing and gained strong momentum over the past year, and I’m very optimistic about 2014.

Together, we are making a difference. With your ongoing support, we’ll continue building on this momentum to create a more compassionate world for all.