This year, with the help of our supporters and members, we rescued hundreds of animals from abuse, neglect, and peril, giving them refuge and rehabilitation at our three shelters. As the year closes, we’d like to share with you updates on some of these amazing survivors.

Scribbles was rescued from rough treatment as a backyard pet, when he was a tiny kid. 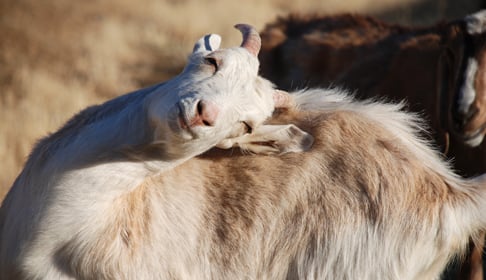 When he was still too small for the goat herd, Scribbles lived in the more subdued company of our sheep flock. His spunk delighted caregivers and guests from the get-go, but the sheep were not impressed with this newcomer’s antics — running, jumping, and playing all day. To their relief, we soon decided it was time for him to join his fellow goats. Scribbles was thrilled. So many new friends to head-butt! He quickly learned, however, that these friends would butt him right back — a shock at first, but he quickly adjusted his expectations. Scribbles is still sometimes too enthusiastic for the tastes of some herd members, but when this happens, seasoned mama goats Annie and Debra put him in his place. His peers often indulge him in play, but Scribbles has no trouble amusing himself by running through the pasture at full speed and executing acrobatic jumps while caretakers and visitors watch with delight. Scribbles is still growing like a weed and on his way to becoming a tall and handsome adult. 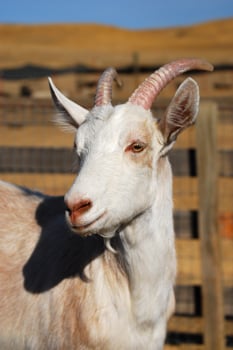 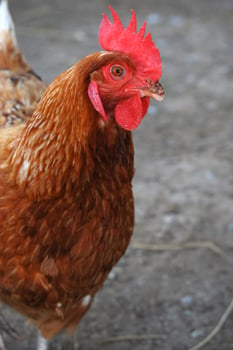 In February our Orland shelter opened its doors to 400 hens rescued from an abandoned factory egg farm, where they had struggled to survive crammed into battery cages without food or water for two weeks. It was a long road to recovery for these girls, who arrived feeble, emaciated, and covered with parasites. To our grief, some were too far gone to save. Most, however, slowly gained strength — and they discovered joy. For the first time in their lives, these hens had space to flap their wings and felt grass beneath their feet and the sun on their feathers.

Many of the hens needed prolonged treatment for poultry mites. Even with these bloodsucking parasites, one particularly vivacious hen named Tilly, got right down to the business of enjoying herself with plenty of socializing and sunbathing. And now that she’s parasite-free, she loves life all the more, especially at meal time: When caregivers arrive with food, Tilly is right there to greet them.

Over the year, we have worked hard not only to rehabilitate these girls but also to find them permanent homes through our Farm Animal Adoption Network (FAAN). In the immediate aftermath of the rescue, we were able to place 50 of the healthiest hens, and have since placed another 100 with wonderful families and sanctuaries in California, Oregon, and Washington. The hens who continue to need extra care will remain with us at the shelter. 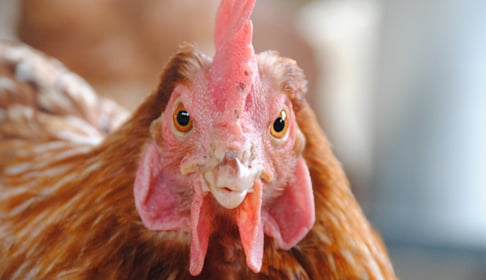 In April, we rescued 60 desperately neglected animals from a backyard butcher in Cattaraugus County, New York. Among the survivors were several mother sheep who nearly starved to death as they struggled to keep their young lambs alive. We have been thrilled to watch these weak, sick sheep transform into the contented flock that now thrives at our New York Shelter.

The first family I saw as I entered that horrible barn in Cattaraugus was Yolanda and her twin lambs James and Anne. Yolanda was so weak that her body had stopped producing milk, and her babies were hungry and bloated. Now they’re the picture of health. Yolanda, like many of the others, was terrified of humans at first and remains a little wary, but her twins have no such reservations. Anne in particular is a free spirit, sometimes to her mother’s chagrin. As Anne scampers off in search of visitors, head-scratches, and adventure, Yolanda “baas” after her. 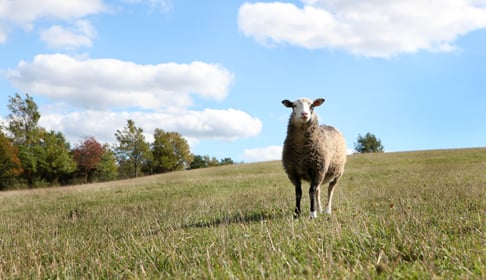 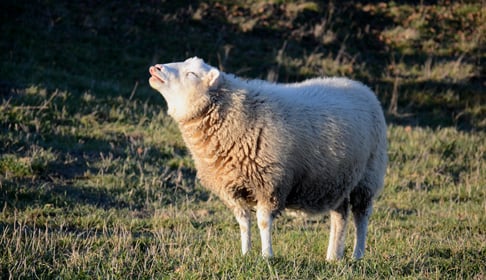 Flock mate Adriano, by contrast, has displayed a stronger sense of familial responsibility. From the start, Adriano was fiercely protective of his mother and his twin, Isabella. When a staff member briefly separated him from his family during a barn cleaning, the 30-pound lamb fearlessly delivered an admonitory head-butt. Although he is still a devoted protector of his mom and sister, Adriano now realizes that the humans here are his friends. He greets you every time you enter the barn, standing close by lest you forget to pet his head and chest. 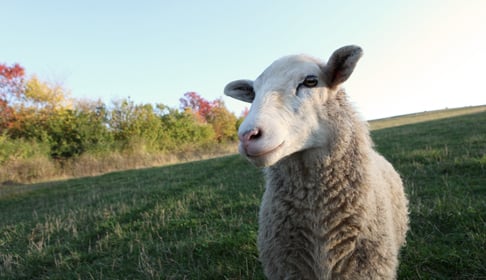 Like Adriano, an old ewe named Audrey has also acted as a pillar of strength since the rescue. The thinnest and weakest sheep of the rescue, she clearly had lived on the property for a long time, enduring pregnancy after pregnancy only to lose her babies to slaughter. Nevertheless, Audrey’s spirit remained unbroken. She has always been the bravest of the Cattaraugus flock, approaching us even at the beginning when the others were too shy. She is a wonderful flock leader. Her fellow sheep stay with her all day, and her devoted son Abbi — the lamb who, at last, she will be allowed to keep with her — is never far from her side. 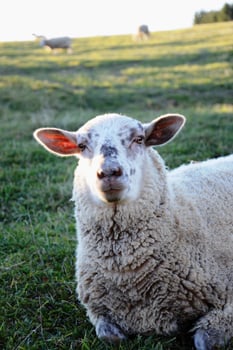 Belinda was among seven emaciated cattle rescued from the same backyard butcher. Far too old to be safely bred, she was pregnant when we rescued her. As she coped first with starvation on that barren Cattaraugus field and then with the resulting illness at our shelter and at Cornell University Hospital for Animals, Belinda received help not only from us but also from her fellow cows. Her herd mates took in her daughter Octavia, born before her rescue, and then her son Elijah, born at the shelter.

With her children thriving under the care of their adoptive mothers, Belinda could devote her strength to battling her ailments. She struggled with mastitis and a pathological bleeding condition that left wounds wherever her doctors drew blood or administered injections. She had anemia and renal failure. Rotten teeth made it painful for her to eat, and she required immediate dental care. She was extremely sick for months. At one point, she nearly died. We still monitor her closely for mastitis and give her a special feed to help her gain weight, but Belinda is finally and decisively on the mend. She gets better every day — and happier too. She was once scared of humans, but now she is confident and friendly with her caregivers. And, she adores her new companions in our special-needs herd. Astoundingly, after all she has suffered, Belinda is in love with life.

Julia and Her Piglets

When we last told you about Julia, this brave sow was still recovering from a premature delivery in the wake of a brutal beating. A mere eight hours after we rescued her from a factory farm where workers kicked, shocked, and dragged her by her ears, she gave birth to sixteen piglets at our shelter. At one and half years old, she had been on her next-to-last litter, after which she would have been sent to slaughter. 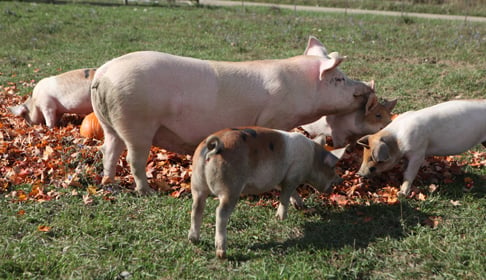 Julia’s babies were fragile, and many needed intensive care to survive. But survive they did – and how! All two pounds or less when they were born, these hearty youngsters are now between 50 and 75 pounds. They are happy, confident, and enthusiastic about life. No wonder — they’ve known nothing but kindness from their first moments.

We’ve placed several of these carefree pigs in wonderful adoptive homes, making sure to keep each with his or her favorite sibling. Diane and Linus, who had the hardest time at first, remain here with their mom. Now healthy and strong, Julia is the happiest pig I know, and she never misses a chance to talk to you when you walk by her yard or come into her pen. Even after all she endured at the hands of humans, she greets us with pure joy. 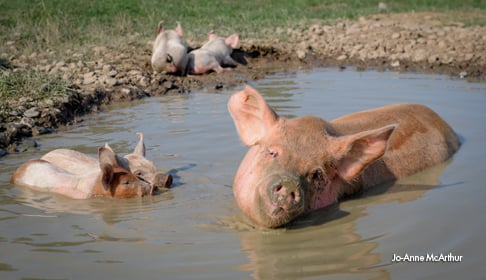 With the support of our members and friends, we have been able to give these, and all the animals we rescued in 2012, a chance to live, to heal, and to know happiness. We extend warm thanks to everyone who has made this year’s rescue efforts possible, and we look forward to helping even more animals together in 2013!