We know that adopting a vegan diet often takes time, and some people find that it helps to take steps on their way toward vegan eating. That’s why we applaud Johns Hopkins’ Meatless Mondays, Mark Bittman’s “Vegan Until 6,” and other campaigns and efforts that start people on a path to veganism — and save animals at the same time. There’s one change that many people may undertake, however, that unintentionally harms more animals than it helps.

I’ve stopped eating red meat – There’s More to the Story
We hear it all the time: “I’ve stopped eating red meat.” We want to be supportive and kind in our response — the person is, after all, telling us about progress they’ve made toward compassionate living. Yet, from an animal welfare perspective, eating chickens and turkeys instead of pigs and cattle is actually counterproductive. Chickens and turkeys in the food industry are treated even worse than cattle. Cattle who are used for meat, for instance, may have some degree of pasture time, but more than 99 percent of turkeys and chickens are confined for their entire lives, unable ever to engage in even their basic natural behaviors. Sadly, it gets worse.

Chickens’ upper bodies now grow about six times more quickly than they did 50 years ago. According to University of Arkansas, “If you grew as fast as a chicken, you’d weigh 349 pounds at age two.” The stress on their bones, joints, and organs is debilitating. Conditions are so bad in modern chicken sheds — which look like carpets of live but unmoving chickens — that the death losses are one percent per week. In a shed containing 30,000 birds, which is fairly small for modern chicken sheds, that’s 300 dead birds per week!

The only federal law that purports to cover farm animals, the Humane Slaughter Act, entirely exempts birds — in other words, 98.5 percent of slaughtered animals are completely unprotected. I won’t give the gruesome details, but what this means is that every aspect of chicken slaughter in the United States would be illegal if these animals were mammals rather than birds.

Chickens are Complex
Some people start on a path toward veganism by no longer eating the larger animals out of the mistaken assumption that cows and pigs are more “like us” (or smarter) than birds and fish. That shouldn’t matter when we’re talking about compassion, of course, but it’s also not true. Studies of chickens have shown that they can learn from watching other chickens on television, delay gratification, and demonstrate other behaviors that indicate that they are at least as cognitively complex as cats, dogs, and other mammals. Find out more on our Someone Project pages, at someoneproject.com. 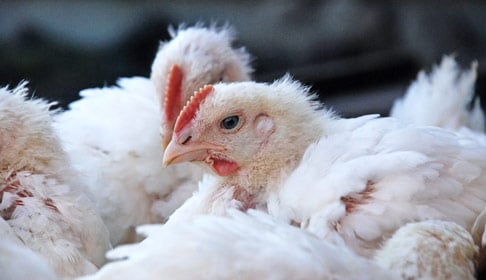 A Gentle Conversation
So the next time someone tells you that they’ve given up red meat, gently ask them “why red meat, in particular?” If they cite health reasons, let them know about the cruelty that birds endure, and you might also mention that studies show no net benefit to cutting back on red meat if it’s replaced with chicken, which has no fiber or complex carbohydrates and is packed with saturated fat and cholesterol. According to the USDA, chicken today has more than 10 times as much fat as it used to (and three times as much fat as protein). Chicken is also the most likely meat to be contaminated with salmonella, campylobacter, and other bacteria, which lead to tens of millions of illnesses annually.

In conversation, never criticize or condemn a person’s food choices, of course, but follow this question with factual information. Explain why the decision to forego red meat is counterproductive in terms of saving lives or lessening cruelty to animals, and educate them about food choices that both save lives and improve their health. That single conversation can make all the difference for thousands of farm animals.

Bruce is Farm Sanctuary’s Senior Director for Strategic Initiatives. Check out his essay and video presentation on effective advocacy in the “Be a Better Advocate” section of compassionatecommunities.org.