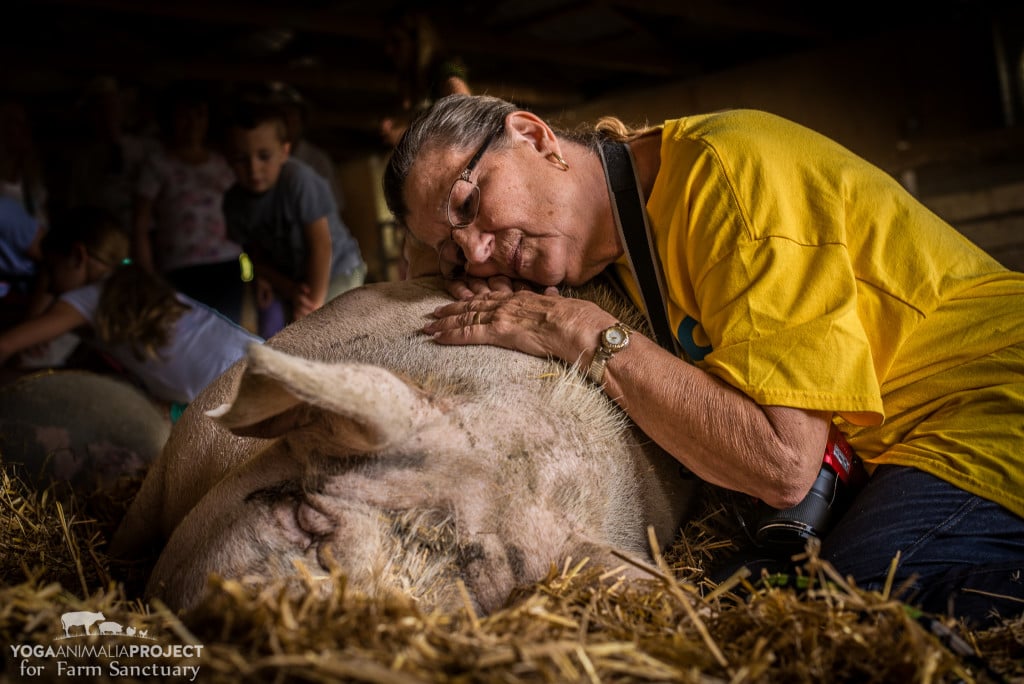 Truffles pig and Denise, who helped rescue her, meet again at Farm Sanctuary.

Truffles pig is a testament of the healing power of love. This wonderful pig, a favorite of many Farm Sanctuary visitors, will be ten this year — an incredible feat considering her origins. She was raised to live to just six months of age, by which time she would have been slaughtered for meat. Instead, nearly a decade later, she is the matriarch of her sounder, loved and respected both by her fellow pigs and her human friends at our New York Shelter.

During her first few weeks of life, Truffles was removed from her mother and subjected to tail docking without pain relief, both standard procedures on factory farms. Confused and frightened, she was then packed onto a hot and crowded transport truck to travel to a finishing farm, where piglets are fattened for slaughter. Her escape from this fate was fortunate, but not without additional hardships. She fell off of a truck into heavy traffic on Interstate 69 in Indiana, and was bruised and bloody from the fall. 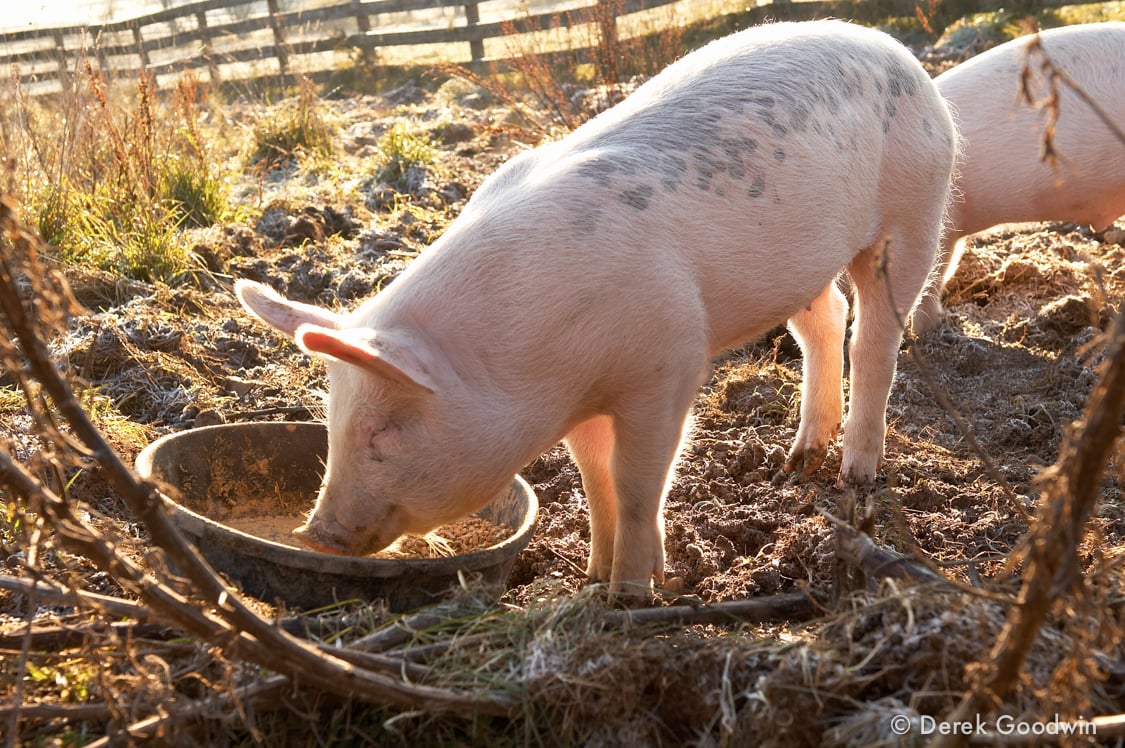 Truffles as a piglet at Farm Sanctuary

Fortunately, luck and love were on her side. A young woman was driving in the opposite direction on the way to a concert when she saw Truffles fall and knew that she had to save her. She reached Truffles before any cars could hit her and brought the piglet to her car, where she placed her on a blanket in the back seat. For the first time in her short life, Truffles was safe — and she was on her way to a new life.

The woman asked a Farm Sanctuary member named Diane if she could foster Truffles, but Diane did not have the facilities to do so. However, Diane had a friend whose own pig had recently passed away, so she contacted Denise and her husband Bob to ask if Truffles could stay with them. Denise and Bob were happy to welcome young Truffles into their home. They have fostered and rescued animals for over 30 years, and have also cared for more than 200 foster children with special needs during this time. This loving home was the perfect environment for Truffles to heal. 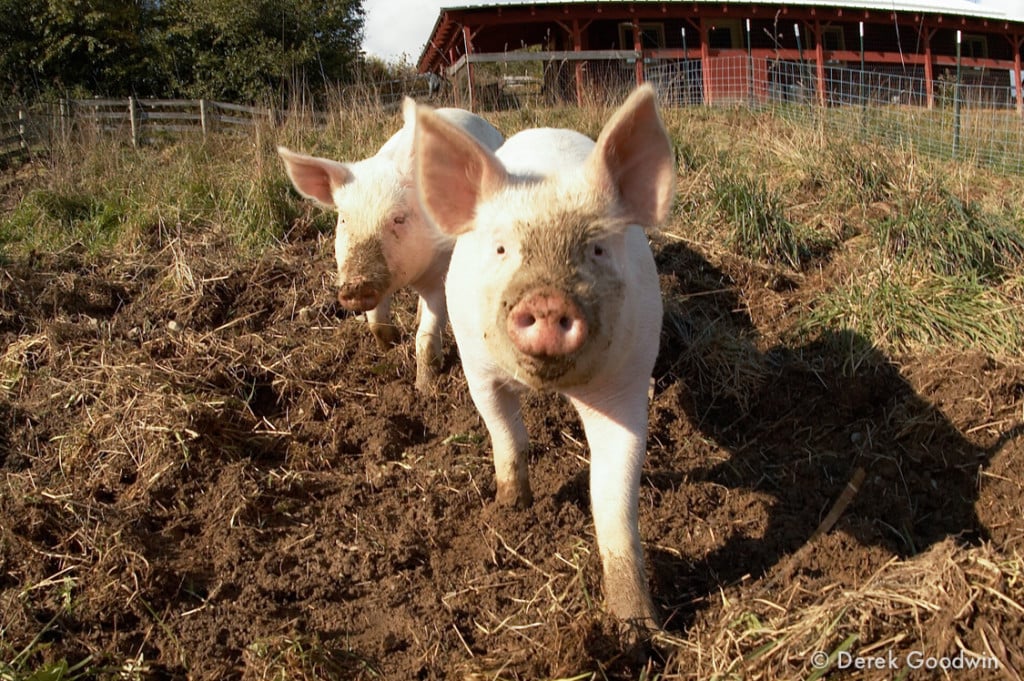 Around this time, a piglet named Rudy had fallen from a transport truck in another county. Denise welcomed him into her home, where he found a companion in Truffles. Diane contacted Farm Sanctuary to ask if we could provide the piglets a permanent home.

Denise, Diane, and our anonymous friend gave Truffles the gift of life, and she has lived a good life surrounded by her porcine and human friends at our Watkins Glen Shelter. She is a happy, carefree girl who is very friendly with people and beloved by her fellow pigs. About a decade ago, after the previous herd leader passed away, Truffles took over in her stead. Even as she has aged, she is still very much in charge, and her herdmates greet her courteously whenever they encounter her. After Rudy’s untimely death due to a congenital condition, Truffles found a best friend in Violet, who arrived about a year after she did. The two picked each other out and have been together ever since. 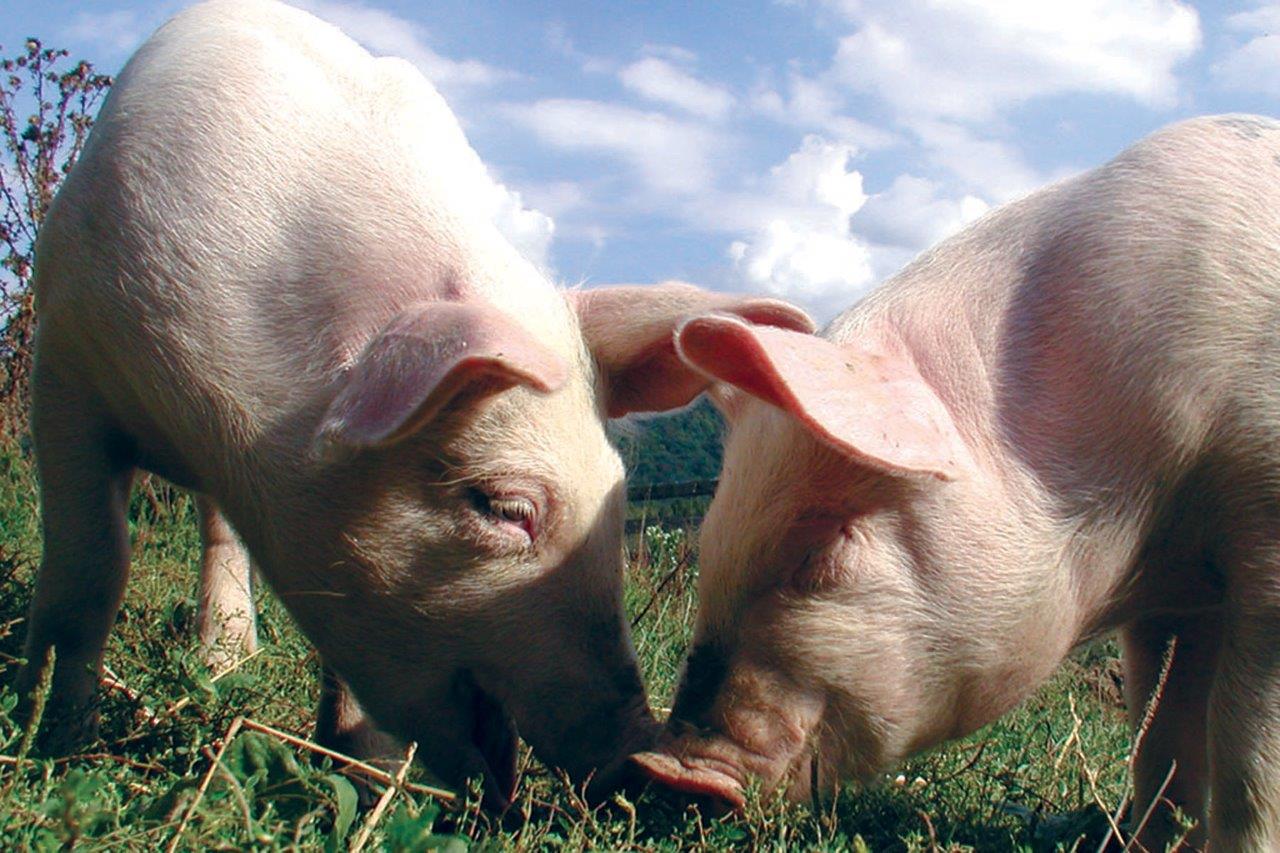 Sadly, Truffles struggles with health issues as a result of industry breeding practices. Her breed is one of the larger of the industrial pig breeds, and she is the heaviest of our female pigs, weighing around 800 pounds compared to the average-sized girls at 650 pounds. These pigs are bred to grow from about three pounds at birth to 250 pounds in just six months, and this rapid growth wreaks havoc on their growth plates. Truffles has severe arthritis, which began early in her life, and when she gets up she starts out by walking on her knees. Pain medications have been very helpful, and her ailments are no match for her high spirits. Within 20 minutes of getting up, she is able to move to her feet and travels far out on her huge pasture, where she grazes most of the day — unless, of course, it is too hot, as the queen of the herd does not like to get overheated!

Neither Denise nor Diane had been able to visit Truffles over the years, though they thought about her often and wondered how she was doing. Recently, Denise saw a photo of Farm Sanctuary president and co-founder Gene Baur with Truffles on Facebook, called Diane, and said they had to go and see her.

“Once you discover the love of a pig, the friendship of a lamb, or a connection with a goat, you also understand how…

Posted by Farm Sanctuary on Wednesday, 13 May 2015

On a hot Saturday in August, the two did just that. They joined me on a tour of the sanctuary before reuniting with their beloved friend. Truffles was laying at the far end of the barn, sleeping peacefully in the straw. Denise and Diane greeted her with belly rubs, hugs, and kisses; Denise especially would not leave her side. Truffles is older, larger, and worn from her age and physical ailments, but to them, she was the same pig they cared for a decade ago. With tears in their eyes, they hugged our photographers and me, truly touched by Truffles’ legacy and the beautiful being she grew up to be.

We are so thankful to Denise and Diane for opening their hearts and homes to this young piglet, and were humbled by their visit with her. Theirs is truly a happy ending, and Truffles is living proof of how humans’ and animals’ lives can be transformed when people recognize animals as someone, not something. 5 thoughts on “Rescue reunion: 10 years later, rescuers visit the pig they helped save”