In Part 2 of our look at foie gras production, we talk with National Shelter Director Susie Coston about the animals rescued from the industry.

How have rescued foie gras ducks found their way to Farm Sanctuary?
The majority have been dropped off in boxes or cages with notes stating that they are from a foie gras facility. We’ve also taken in many female ducks rescued from duck-meat operations or found in trash cans outside of foie gras facilities after they survived gassing. Only males are used in foie gras production, and, currently in the United States, the females are raised for meat. Years ago, producers most often gassed female ducklings and discarded their bodies in trash bags.

What are the telltale signs that a duck has come from the foie gras industry?
All of the foie gras ducks we’ve taken in have very pale bills because of the way they’re housed. Typically, ducks in foie gras production facilities are confined in cramped pens or cages inside dark sheds with no access to the outdoors, fresh air, or natural light. But after a few months at the shelter, where they are free to spend time in the sunshine, their bills regain their natural, vibrant pink or red color. 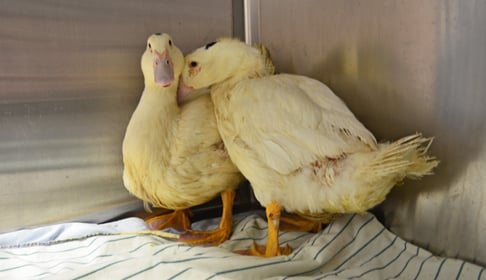 Monet and Matisse shortly after rescue.

Foie gras ducks, especially those who have already been force-fed, are also the most frightened ducks we take in. Obviously, this is a response to being manhandled and having a tube repeatedly shoved down their throats. These ducks have never experienced kindness in human hands. Newly rescued ducks from foie gras facilities usually flee to the corner of their pens at the mere sight of a human.

The duo Harper and Kohl, who were left at the shelter in boxes, are an example of what we typically see in ducks rescued from the foie gras industry. Harper was missing an eye, and Kohl had multiple fractures on both legs that prevented him from standing upright. They had sores on their bills, wounds on their faces and bodies, and broken feathers. The force-feeding had induced hepatic lipidosis (fatty liver syndrome), and both ducks were experiencing respiratory distress because their abnormally large livers were putting pressure on the surrounding organs, which in turn were pressing on their lungs. Kohl and Harper were terrified of humans when they arrived, and, although they grew comfortable at the shelter, they never overcame their fear of human contact. 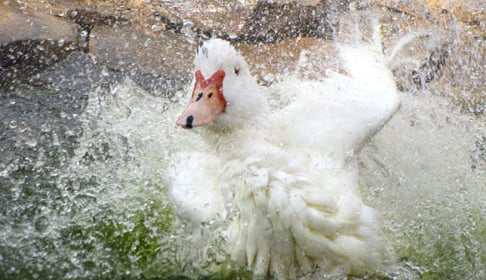 Kohl healthy and splashing at our New York Shelter.

What is the rehabilitation process?
Each group has been different. We have taken in babies who simply required basic care like any other rescued ducklings. In fact, we recently welcomed four ducklings, Ellen, Carrie, Emily, and Kristen, who were rescued from the foie gras industry when they were only days old. Fortunately, these sweet ducklings avoided the horrific abuse that occurs in production facilities. So the main concern with them is to provide adequate nutrition while managing their weight since obesity is common in this breed used for meat production and pâté.

Adjusting to life outside of production is slow and difficult for the ducks who have been subjected to force-feeding. They don’t want to eat and usually have trouble doing it on their own in the beginning. We had to hand-feed Harper and Kohl for the first few weeks. And rescued foie gras ducks commonly require treatment for sores, abrasions, broken bones, and other wounds. Harper and Kohl underwent months of treatment before they were fully healed and able to live like normal ducks.

Many of these ducks require special care as they get older, too. The foie gras industry uses Moulards (also called mule ducks), a sterile hybrid of Pekin and Muscovy breeds. Female Moulards are prone to reproductive tract cancers. And because they are bred to be large and heavy, both males and females tend to experience arthritis as they age.

Besides improved health, what changes do you see in rescued foie gras ducks as they are rehabilitated?
They come to life! Ducks in foie gras production are very sick animals that live in constant fear. Over the course of force-feeding, they feel progressively worse and have increased trouble walking, breathing, and even standing up. They are not afforded the basic comfort of a body free from pain and safe from violence, let alone the freedom to enjoy any of the activities that fulfill their natural instincts. Once rescued ducks begin feeling better and settle in at the shelter, you see just how happy these birds can be.

When we took in Monet and Matisse, another pair left at our door, they were very quiet and subdued. Whenever a human entered the room they would cower in the corner. Then one day, Monet stood up tall and flapped his wings! It was the first sign of happiness from either of them. Since then, they’ve become much more confident, and their spirits have really lifted. Together, they are a strong pair. Now, they even approach people who enter their barn. Monet and Matisse are also stunning, with beautiful feathers that no longer show any signs of the cruelty they endured. 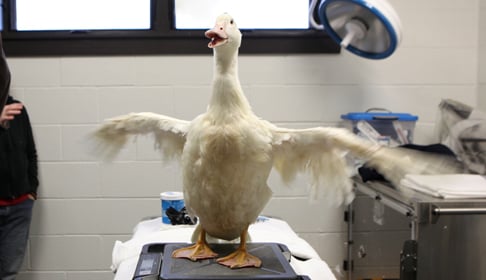 Monet at our Melrose Small Animal Hospital where he was finally given the space to spread his wings.

Being with their family and friends is very important to ducks because they form lifelong bonds. Our ducks sleep close together every night and communicate with each other constantly. Best friends Harper and Kohl were never more than a few feet apart from each other during their entire lives at the shelter, and Monet and Matisse are also inseparable.
Moreover, ducks are clean animals who need to bathe, but they are denied this natural behavior in production facilities, leaving the birds to suffer as they are covered in old feed and fecal matter. One of the first things these ducks do when they arrive at the shelter is to take a bath in their water bowls, eagerly dipping their heads in and splashing water everywhere. When they are well enough to go outside, we immediately take them to the water to enjoy a swim for the very first time. It’s amazing to watch rescued ducks get out on the pond or a pool because their joy is so obvious. Even Kohl, whose legs were permanently deformed due to the fractures he suffered before his rescue, swam like a maniac. Our rescued ducks really enjoy sunbathing, eating grass, and filter-feeding in the mud. They just love being ducks! Monet and Matisse regained their health at our New York Shelter.

8 thoughts on “The Truth about Foie Gras: Part 2”