People often ask me about the health benefits of a vegan diet. They want to know: How does a vegan diet affect your energy level? What do you eat to fuel your running? Do you feel hungry most of the time? These questions were in my mind when I signed up for the 2013 Ironman triathlon in Lake Placid, New York, an event that requires swimming 2.4 miles, biking 112 miles, and running a 26.2-mile marathon. Ironman Lake Placid (IMLP) is one of the most challenging Ironman courses, with a total elevation gain of nearly 5,000 feet in its 140 miles. Actions speak louder than words, and I wanted to demonstrate how healthy plant foods are, not only for everyday activities but also for intense athletic feats. 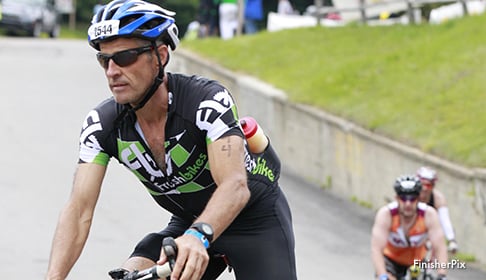 Gene focused on the bike course.

Just Doing It
In the weeks leading up to IMLP, I followed a training plan and focused on good nutrition to prepare for the grueling event. I ate protein-rich quinoa, beans, and tofu, and loaded up on performance-enhancing foods such as arugula and beets.

During the race, I drank coconut water for hydration and electrolytes and paced myself for the long distance. Crossing the finish line in just under twelve hours, I was very happy to be officially named an “Ironman.”

Athletes are bombarded with marketing campaigns promoting meat, milk, and eggs for health and athletic performance. These are myths that continue to be promulgated, and, in fact, at IMLP the milk industry was out in force as a major sponsor of the event. Dairy promoters target athletes with messages that drinking cows’ milk helps the body perform and recover from vigorous exercise and physical activity.

Just after the finish line at IMLP, athletes were given chocolate milk and draped with a blanket that said, “got chocolate milk.” I refused the cows’ milk, but I took the blanket and turned it inside out to avoid advertising a cruel and unhealthy product.

Plant foods fueled me during training and on race day, and my vegan diet was responsible for helping me make a swift recovery. The day after the race, when some other IMLP finishers were limping around Lake Placid, my legs and body felt good. Gene finishing the 26.2 mile run of the race.

Away from the athletic field, health experts are also weighing in on the benefits of eating a plant-based diet, including doctors Caldwell Esselstyn and Colin Campbell who are featured in the groundbreaking film, Forks Over Knives. Recently, Harvard School of Public Health Director Walter Willett, M.D., stated in a lecture to students at the Institute of Integrated Nutrition that milk does not prevent fractures and is not a calcium solution. He added that too much milk might be harmful, especially in causing prostate cancer in men.

Go Vegan Go!
I completed the final leg of the triathlon — the 26.2-mile run — wearing a shirt that said “Going the Distance for Farm Animals” on the front and “Go Vegan Go” on the back. When I felt sore or tired, I thought of the animals suffering on factory farms, and my resolve would strengthen. I was there representing them and demonstrating that humans can excel without consuming animal products. The run is my strongest leg of the triathlon, and I passed many competitors who saw the word “vegan” on my back as I ran ahead.

I have been inspired by other athletes who are actively promoting vegan living including Rich Roll, Rip Esselstyn, Brendan Brazier, Scott Jurek, and Matt Frazier, the No Meat Athlete. During my training and at the event, I also met many athletes who were not vegan but who expressed curiosity and interest in how I prepared for the race in order to perform so well. It is my hope that, by example, I might motivate them to explore plant-based eating.

A strong connection is emerging between the ethically oriented and fitness-oriented vegan communities today. We share the common goal of living healthy lives, both emotionally and physically, without causing pain or harm to any animal. Together, I believe we can inspire even more people to stop and think about how (and who) they eat and why it makes sense to ingest plants instead of animals. 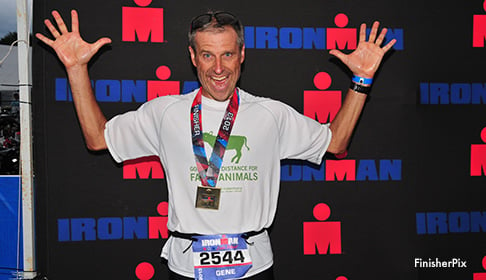