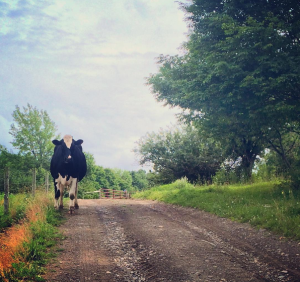 I turned around and Sonny was there.

I was having a really sad day. I decided to walk up the hill to find my best pal, a steer named Sonny. For five minutes straight, I just hugged him, wetting his neck with possibly a gallon of tears. Knowing I had to get back to work, I finally parted with him and walked down the hill toward the shelter buildings.

After a while, I heard a noise and turned. Sonny had left the herd and followed me. He knew I needed him, so he was there.

Just like us, animals need to feel that they are not alone. During my two decades in animal sheltering, I have witnessed the power of family and friendship every single day. All creatures have a will to live, and friendship motivates them to live their best, supported by and supporting others.

Here are my favorite examples from the past year. 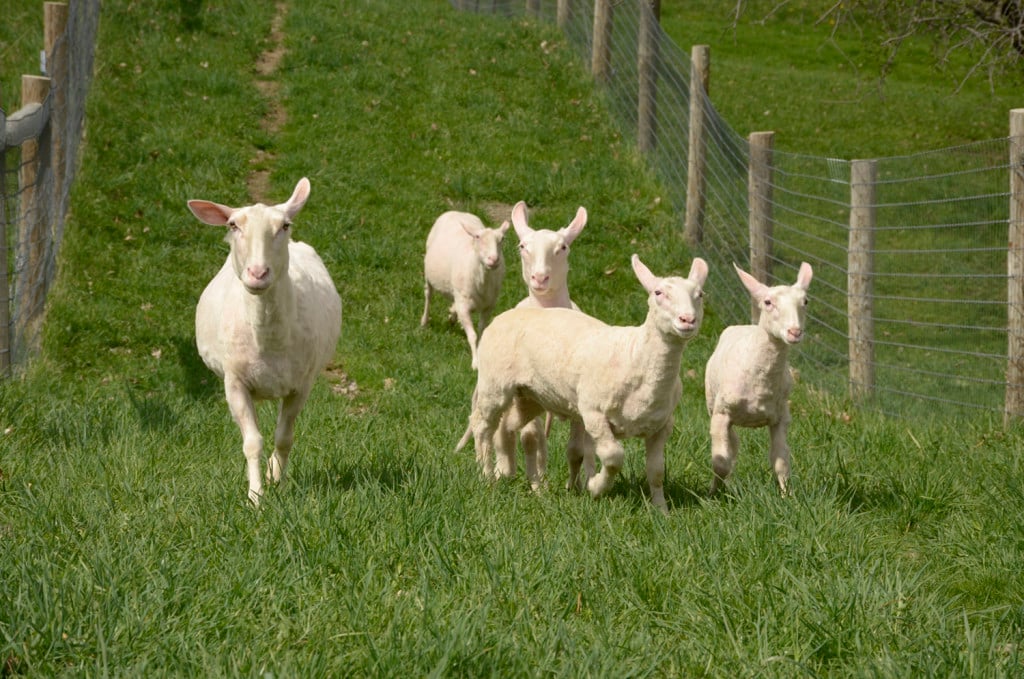 In February, three lambs were born at our New York Shelter. Far along in their pregnancies when they were rescued from neglect, mamas Tracey and Louise (Tracey’s daughter) faced high-risk deliveries, but with the help of devoted shelter staff, everyone made it through. Tracey, who delivered son Hazelton first, supported Louise during the birth of twins Reubie and Summer, calling out to the younger ewe throughout her labor. Tracey also nursed Summer when Louise couldn’t produce enough milk for both twins.

As dairy sheep, Tracey and Louise endured repeated impregnation. Though Tracey was allowed to keep Louise, all of her sons were likely taken away to be sold for slaughter. Hazelton was the first son she was allowed to keep, and she wasn’t about to let anything happen to him. When we introduced the group to our main flock, Tracey immediately began putting everyone in their place, head-butting even the largest males, so all knew that her family was not to be bothered.

Sheep express affection and devotion primarily through physical closeness, which is why you’ll find this family sticking together and sleeping side-by-side at night. For Tracey and her clan, sanctuary means being together. Levi was found loose in NYC after escaping from a storefront slaughterhouse. During his first weeks at sanctuary, he stayed indoors sitting on a hay bale. We feared this behavior arose from health issues, but it turned out that Levi, who had likely witnessed the slaughter of his herd mates, was simply too terrified to do much of anything. Though we approached him with gentleness and care, he could not trust us.

That all changed when he met Romy, a lamb who came to us from a small farm where he was found alone and dying in the cold rain. When Romy was finally well enough to go outside into his yard, Levi couldn’t help coming out into his own adjacent yard to investigate. Within hours, the little goat who had been paralyzed by fear was running, jumping, and kicking up his heels as he played with his new best friend.

Following the lead of gregarious Romy, Levi has become a whole new goat, bravely walking right up to human visitors. His friendship with Romy has transformed him, and his world, once limited to the corner of a hospital pen, has gotten a whole lot bigger. 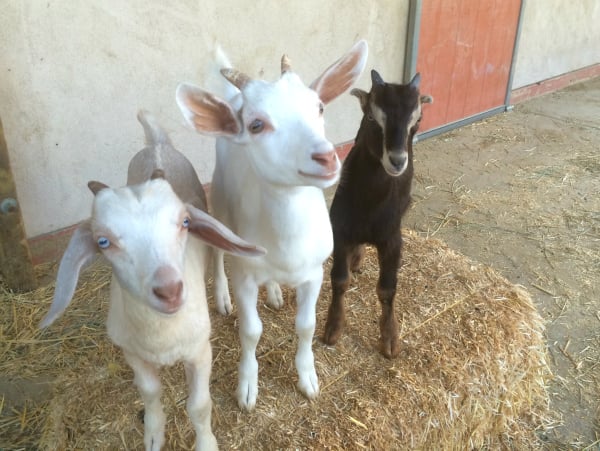 Vince had a rough start in life. Born at a goat dairy — a male kid in an industry that has very little use for males — he was used as partial payment to a tree trimmer. But the tree trimmer didnʼt want him either, and went door-to-door in his neighborhood trying to sell him. Things started to look up for Vince when he was taken in by a kind woman who wanted to protect him, but she soon discovered that her little charge was very sick. She contacted Farm Sanctuary, and we were able to get Vince the care he needed, which included antibiotics, tube feedings, and medication for his pain. Slowly but surely, he began to feel better, and he was finally able to leave the veterinary hospital and come home to our Acton shelter. But goats are herd animals; Vince was lonely as the new and only kid at the shelter.

Fortuitously, we learned that a combination goat dairy/sanctuary is phasing out their dairy business to focus on their sheltering work. Though the sanctuary’s operators initially intended to support their sheltering work by selling dairy products from the goats in their care, they eventually realized that this model was not sustainable. Goats, like all other mammals, must be impregnated in order to lactate. That means that goat dairies produce not only milk but also baby goats. The facility had more goats than it could handle.

Enter Calvin and Paul Harvey, the best friends Vince could have hoped for! The trio has become a source of endless entertainment for sanctuary guests and staff. One of their favorite games is bouncing off caregivers who are bent over or lying on the ground with them. Buoyed by the friendship they share and the caring people all around them, the kids are keen to explore and experiment. For these best friends, the sanctuary is the best kind of playground. Anna & Maybelle — the best of friends and sweet as can be! Follow their adventures in their new home at The Daily Squeal!

Anna and Maybelle had likely fallen off a transport vehicle before they were spotted wandering on a busy roadside. Piglets are notorious for squirming their way out of trailers, and they sometimes fall out onto the road without the driver even noticing (this in addition to the countless piglets and other farm animals who end up on the road when transport vehicles crash or overturn); many of our residents came to us after these accidents. Such incidents can be fatal for the young animals, but Anna and Maybelle were lucky enough to avoid being seriously injured in the fall or getting hit by another vehicle. They also had each other, which was surely a comfort during their two frightening days by the roadside. Right now, these piglets’ lives are all about exploration and fun — and each other. They play and dig and run with utter abandon, and they are always together. When separated for even a few moments, they squeal and run to search for one another. When we watch them romping and rooting, we recognize a common joy in simply being alive.

There are so many other beautiful bonds that we’ve seen over the years. It saddens me that the majority of industry-raised animals are deprived of these experiences, but at Farm Sanctuary, we take the time to nurture these ties that mean so much to our animal residents. We recognize that our animal residents share so much in common with us: awareness, intelligence, rich emotional lives. Just like us, they crave companionship, playmates, and a support network — and making sure they have it is a vital part of the Farm Sanctuary life.

9 thoughts on “We Are Not Alone”