Two of the 725 chickens rescued by Farm Sanctuary in the aftermath of Katrina.

It’s been 10 years since Hurricane Katrina’s landfall. As we honor those individuals — human and animal — who lost their lives in the storm, we also pause to remember hundreds of chickens whose lives were saved.

Katrina and Farm Animals: By the Numbers

725: Chickens saved by Farm Sanctuary in the days following Katrina. All of them were brought to our New York Shelter for care. They had a variety of health problems — some caused by the storm’s aftermath, many simply the result of standard industry practice. Their problems ranged from septic joints to severe digestive issues, from gangrene to broken toes. One had a large head wound; another was found with her eyes swollen shut. Many had gone days without food or water. The sick and injured birds received care ranging from treatment with painkillers, steroids and antibiotics to major surgery.

200+: The number of birds that were taken in by other sanctuaries or adopted by private individuals. The compassionate people who took in these chickens not only provided lifelong care for animals who had suffered so much — they also made it possible for us to say yes to many more chickens in need. (If you are interested in providing a permanent, loving home for a farm animal, please consider becoming a part of the Farm Animal Adoption Network!)

635 million: The estimated number of farm animals being raised for food in Alabama, Florida, Georgia, Louisiana, and Mississippi when Katrina made landfall. Millions of them died.

9: Years that KC, the last of our Katrina survivors, lived after her rescue.

6: Weeks a typical “broiler” chicken lives before it is killed for meat. Miyun Park, Kate Walker and Peter Wood pull a chicken from a pit

Farm Sanctuary rescuers — working with other groups — traveled to devastated areas, searching for surviving farm animals in need of rescue and negotiating the release of animals from area farms. Rescuers reported mass graves of dead birds, demolished warehouses confining tens of thousands of birds, and fields littered with dead chickens — and live chickens running for their lives.

Sadly, the industry views these animals as commodities rather than living, feeling beings. “Clean-up” crews were sent to bulldoze damaged buildings, with live animals still trapped inside, and to discard the debris and bodies as trash.

“We saw a massive open grave containing thousands of dead chickens… Shockingly, 21 were still alive, huddled in the corner of the pit,” Farm Sanctuary rescuer Kate Walker later recalled of her experience at a Mississippi poultry farm under contract with Tyson. A tornado spawned by the hurricane had completely destroyed one of its warehouses and severely damaged two others. Working tirelessly, our crew pulled trapped and injured chickens from the wreckage, examined them, and prepared them for transport to safety. Mako, one of about 250 roosters rescued from Katrina

Mako was the largest of the birds. Because “broilers” are typically killed at such a young age, those who breed and raise them don’t give any consideration to their long-term health. They grow at an alarming pace (in the past 50 years, the amount a broiler grows each day has increased by more than 300%), but terribly few have the opportunity to live to maturity. We kept these birds on a strict diet for health reasons, and even on that diet, Mako weighed nearly 16 pounds — the size of a wild turkey!

Ginger’s unique and resilient spirit left an imprint on all who met her. She was one of the many thousands of chickens bulldozed into huge pits after the hurricane. Rescuers found her in one of these pits struggling to survive and suffering from severe gangrene. Her will to live was remarkable! She eventually had part of her foot removed as a result of the gangrene, but even this couldn’t dampen her spirits. Through all her struggles, Ginger remained cheerful, active and outgoing. 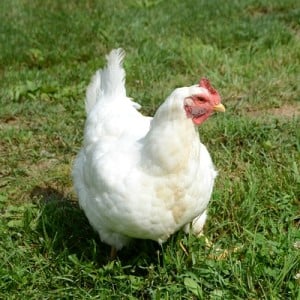 KC was the longest-lived of the birds. When newly rescued, she was among dozens of chickens who required surgery to remove the crop, a digestive organ that stores food and starts breaking it down. She survived the storm, its aftermath and a severe health problem, and went on to live nine more years!

Cranberry and her friends took shelter under bushes and ate berries to survive. The berry bushes left purple stains on their feathers: a mark of their intelligence and will to live!

Greger was one of the most badly injured birds we rescued. He was found with a severe head wound, but within a few weeks his condition was greatly improved. Through the generosity of our supporters, we were able to add a new nursery shed to our New York Shelter, which housed the sickest and most badly injured of the rescued chickens, including Greger.

Mako, Ginger, KC, Cranberry, Greger and the other rescued chickens provided the equivalent of a master course on caring for factory-farmed Cornish chickens. To this day, these birds hold a Farm Sanctuary record that comes with unfortunate health implications: They remain the largest members of their breed that we’ve ever had at the shelter. In addition to the issues caused directly by Katrina, these birds had to contend with a host of health problems that were the result of standard industry practices. They were bred to grow too big, too fast, and that left many of them with weight-related health problems — from blown ligaments to infected feet to rickets. A number fell victim to a sudden-death syndrome so common in broiler chickens that the industry gave it a name: “flip-over disease.” (Factory-farm broilers typically reach slaughter weight when they’re 42 days old, but many don’t even make it that long — it’s common for them to die even earlier from heart failure, ascites, and other conditions related to their size and diet.)

One hundred of the chickens arrived at Farm Sanctuary with septic joints. Many had problems with their crops. Since these birds were genetically altered to eat excessive amounts of food, they will often impulsively eat straw or other materials when no other food is available. These materials then become lodged in the crop or in the digestive tract, or the sheer mass actually stretches out the crop so far that the muscles no longer work. Some crop problems were successfully treated with antibiotics and anti-fungal medications, but more than 40 of the chickens, including KC, required corrective surgery at Cornell University Hospital for Animals. Three chickens had developed gangrene as a result of smashed, broken toes that had been left untreated. When the birds came to Farm Sanctuary, they received their own full-time caregiver. Every one of the interns at our New York Shelter was involved in caring for the birds, as were a number of volunteers. They dispensed painkillers, antibiotics, ligament supplements and IV fluids; they wrapped the feet and taped the joints of birds struggling with leg problems because of their weight; they held birds aloft in sling bags to keep their weight off their feet.

Hundreds of the birds were placed in sanctuaries or with caring adopters. The remaining birds lived out their lives at Farm Sanctuary. The roosters, victims of their larger size, generally lived shorter lives than the hens; our oldest boy lived five years at Farm Sanctuary after his rescue. Many of the hens had six to nine happy years at our New York Shelter.

After lives in dim, crowded warehouses, these resilient birds took to the airy barns and sunlit pastures of the shelter with relish. While many didn’t have the long, healthy lives we would have wished for them, all had the opportunity to know love and kindness.

Images from the Field

What follows are photos from our rescue mission. Please note that some are graphic and may be disturbing to some readers. A chicken wanders on a devastated farm in the aftermath of Katrina. Peter Wood works to pull chickens from a pit. A bulldozer used as part of the “clean-up” effort on a Mississippi farm.

While a natural disaster was the reason we became involved with these 725 chickens, many of the problems they faced were the result of standard industry practices that affect billions of birds. Learn more about the way chickens are raised for meat and, if what you read moves you to act, find out how to get involved. If you’re already advocating for animals and are looking for ways to expand on your efforts, we encourage you to join our Compassionate Communities Campaign. And if you’d like to help farm animals by changing your eating habits, V-Lish is a great place for tips and recipes!

To learn more about the proper care of large-breed chickens like those from this rescue, read our sanctuary and farm animal care guides.

Many compassionate people helped us with this rescue by supporting us financially; by working with us as interns; and by offering adoptive homes.

Want to learn more about Farm Sanctuary? Read the stories of some of our recent rescues, such as these 60 chickens who fell off a transport truck. See photos and videos of our rescued residents and learn more about our work by liking us on Facebook, following us on Twitter, subscribing to our YouTube channel and following us on Instagram. You can also visit our shelters in New York and California and meet our residents, many of whom have survived abuse, neglect, illness, injury or natural disaster.

4 thoughts on “Remembering the Rescue Chickens of Katrina”